What Does Gold Do During A Government Shutdown?

(Kitco News) - The risks of a government shutdown continue to rise as Congress’ deadline quickly approaches; however, gold bulls might be disappointed if they are expecting to see higher prices as a result of ongoing political turmoil on Capitol Hill. 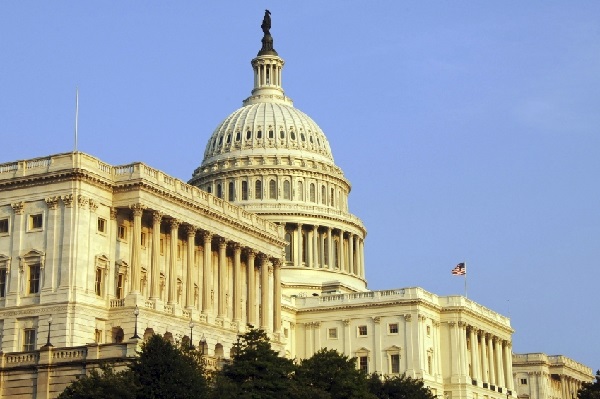 Washington has until Friday to come up with an agreement to fund the government. But, with a growing number of politicians are pushing back against the idea of kicking the problem down road for another month, there is an increasing possibility that the government will shut down.

Analysts say that this is more of a political issue that won’t impact economic conditions, which could create further profit taking in gold after prices recently traded at a four-month high.

History would also support the idea of weaker gold prices during a government shutdown. During the last three shutdowns, gold has lost ground. 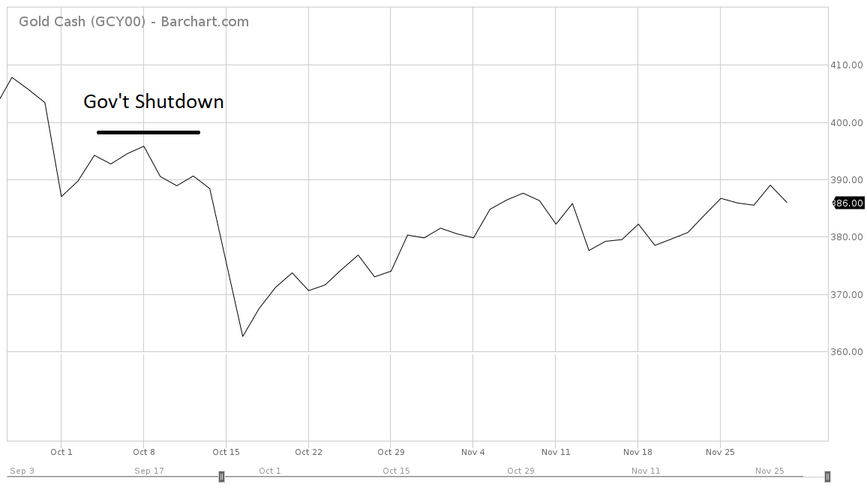 On Oct. 4, 1990, the day before the first closure in recent history, gold prices were trading at $392.30 an ounce. On the last day of the closure, Oct. 9, gold prices were at $389.70 an ounce. The selling pressures continued until Oct. 16, when the market fell to $362 an ounce before finding some renewed momentum. 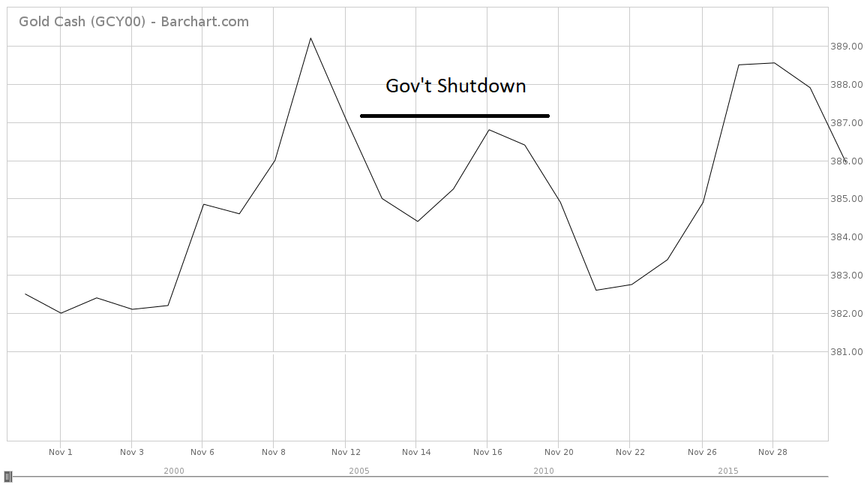 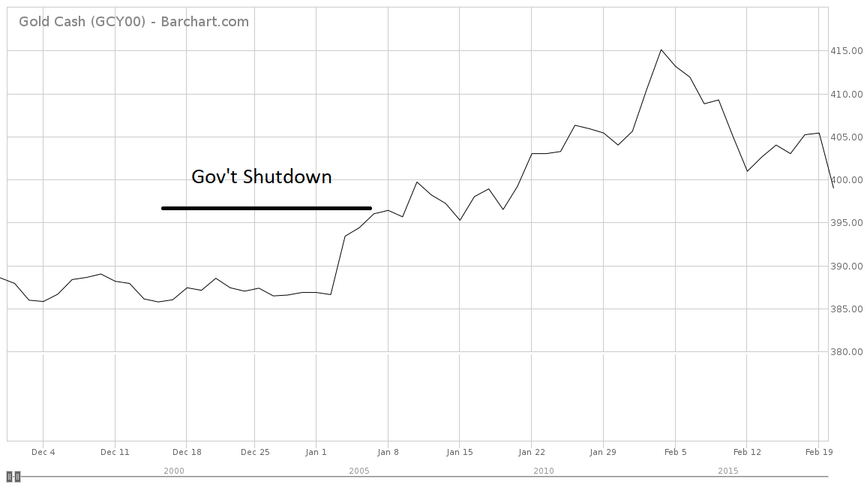 Looking back at the technical charts, analysts have said that the rally in gold was probably due to favorable seasonal factors, as January is traditionally a strong month for the precious metal.

Gold prices continued to push higher and ended October at $1,349.30.

Back to 2018, sentiment in the gold market is a little more dispassionate Ahead of a potential shutdown, with many expecting gold prices to consolidate after a strong performance in the past month.

“As long as gold holds $1,300, the market remains in a bullish uptrend. I think that is all that matters right now,” said Colin Cieszynski, chief market strategist the Fundamental Technician.

Cieszynski added that gold might not see much traction from a new government shutdown because the market has been decentralized with the threat. This is the third time since October that the government has been on the brink.

“I think markets are exhausted as the government just kicks the can down the road,” he said. “The reality is that a government shutdown isn’t a significant deal because it will eventually be resolved. The economy will not collapse because of a shutdown.”

George Gero, managing director at RBC Wealth Management, also sees further consolidation in gold in the near-term regardless of whether there will be a Â government shutdown or not.

“To get another rally in gold we will need to see a major headline and I don’t think a shutdown will do it,” he said. “As one trader told me the other day: ‘We’ve seen this movie before.’”

Government Will Still Provide Essential Services During A Shutdown

Market analysts are dismissing the impact of a potential government shutdown, saying that the economy will continue to perform as there is no threat of a breakdown in society.

Political pundits have noted that while the government could be technically shutdown, not all federally funded programs and services will be halted. Any agencies and programs that are deemed “essential services” will continue to operate.

One of the reasons market analysts aren’t concerned that a government shutdown will impact markets is because there are expectations that the issues will eventually get resolved. However, some analysts say that a protracted shutdown could eventually hurt the U.S. dollar and boost gold prices higher.