(Kitco News) - Bitcoin and cryptocurrencies should not be considered a substitute for gold, according to the World Gold Council.

In a report published Thursday, the WGC said that gold possesses several characteristics that differentiate it from digital currencies. The most notable factor is that cryptocurrencies have yet to prove their worth as a strategic component to a portfolio, unlike gold.

“Gold is a tried and tested effective investment tool in portfolios,” the report said, “it has been a source of returns rivalling that of the stock market over various time horizons; it has performed well during periods of inflation; it has been a highly liquid, established market; and it has acted as an important portfolio diversifier, exemplifying negative correlation to the market during downturns.”

On the contrary, cryptocurrencies have not accrued a track record in multiple market conditions; bitcoin has, since its inception, operated during the second longest bull market in the S&P 500’s history, which has seen very low volatility.

“The crypto-market is young, and liquidity is scarce,” the analyst at the World Gold Council said, “its price behavior at this point, while still attractive to many investors, seems to be driven by high return expectations.”

The report stated that bitcoin’s high volatility also sets it apart from traditional safe havens like gold, and further disqualifies the digital coin as a legitimate currency.

“While [high volatility] is good for investors looking for extremely high investment returns, it is hardly a characteristic of a currency, let alone a store of value, potentially limiting bitcoin’s use as a transaction token,” the report said.

Despite its parabolic rise in recent years, the world’s largest cryptocurrency has fallen more than 40% since its mid-December 2017 highs, a correction that gave bitcoin a volatility level that is nearly as high as the “realized volatility of the VIX itself.” 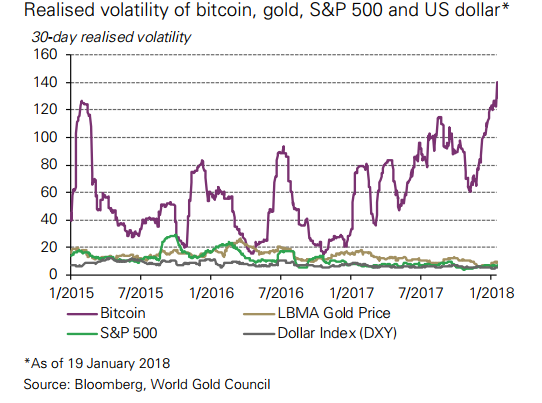