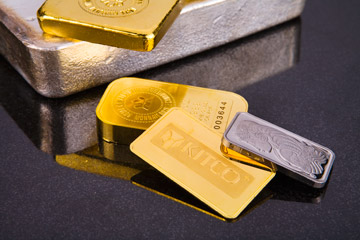 (Kitco News) - This year will be filled with a number of risks surrounding global economy, which makes gold the perfect “defensive play” of 2018, said Mitsubishi analyst Jonathan Butler.

Gold will remain supported throughout this year due to “favorable real rate environment and a subdued U.S. dollar,” Butler wrote in a note on Wednesday.

The Federal Reserve kept its rates unchanged within a 1.25% and 1.50% range during its Wednesday’s announcement but emphasized that rates will only be going up in 2018.

Butler pointed out that the path of tightening monetary policy will be a slow one this year, which works in favor of the yellow metal.

“The U.S. Federal Reserve is likely to raise interest rates only slowly and conservatively and be disinclined to get ‘ahead of the curve’ despite the U.S. economy growing at full steam and signs of rising inflation beginning to emerge, partly as a result of a weak dollar,” Butler said.

“Though US government bond yields may begin to break out of a 30-year downtrend, yields are likely to remain subdued overall and real rates will be kept low if inflation picks up,” he added.

“The dollar is likely to underperform relative to other major currencies as quantitative easing is dialed back and possibly ended in the Eurozone.”

Also, gold prices are likely to receive a boost from growing worries around U.S. fiscal position and a possible correction in the equity markets.

Butler sees gold tarding at an avergae price of $1,410 by Q4 of this year.

“Gold will benefit from some risk hedging,” he said. “Holding gold as a defensive play in 2018 may make sense for more investors.”