(Kitco News) - Equity markets continue to recover from Monday’s flash crash and while volatility is back, it would take a much bigger correction to boost gold and precious-metals prices on a safe-haven trade, according to one commodity analyst. 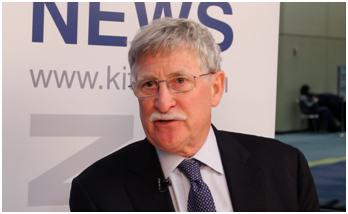 In a telephone interview with Kitco News, Martin Murenbeeld, president of Murenbeeld & Co., said that while the drop in equity markets was shocking -- the Dow Jones Industrial Average at one point Monday was down 1,600 points – it fundamentally didn’t change anything for financial markets.

He added that many analysts and investors were expecting to see a correction at some point. “Well now they got it,” he said.

Murenbeeld added that even after Monday’s correction, equity markets were holding well above their 200-day moving average, which is also represents a major long-term trendline. Equity makets have continued to push off Monday's lows with the Dow Jones last trading at 25,178 points, up 1% on the day. At the same time gold prices have struggled to hold on to important support levels; April gold futures last traded at $1,322.90 an ounce, down 0.50% on the day.

Although gold has not benefited from recent equity-market weakness, Murenbeeld said that the yellow metal has held relatively steady, and remains a “refuge” for some investors. He added that gold is not seeing more of a benefit because Monday’s correction has not shifted expectations for the Federal Reserve.

“I don’t think this equity-market correction is big enough yet to cause the Fed to back away from a hike in March,” he said.

Murenbeeld added that the correction would have to be big enough to push the U.S. into a recession for gold to really attract safe-haven flows.

Looking at gold, Murenbeeld said he sees the metal’s current price as relatively fair value. He added that the market looks like it could meet his firm’s bullish forecast for prices to average $1,385 an ounce.

The recent price action, Murenbeeld said, will serve some notice to the Fed that markets and investors are now paying more attention to interest rates. He added that the risk of further equity-market corrections will keep the Federal Reserve from aggressively raising rates.

“Inflation is likely to drift higher so it’s my guess that on the short end, we are going to continue to see low to negative yields,” he said. “The long end is a little more complicated but I don’t think we are going to see a surge in 10-year TIPS yields.”