“[I]t looks to me like it could now get really exciting for gold bulls,” Jesse Felder, publisher of the Felder Report investment newsletter, said in a report released Thursday.

“On the weekly chart there is now a clear head and shoulders bottom pattern in play. A break above the neckline would confirm the pattern and project an eventual target near $1,650.”

Gold prices have moved higher Thursday as stock markets continued to correct. The Dow Jones Industrial Average has fallen nearly 9% so far in February, plunging some 1032 points Thursday. Meanwhile, April Comex gold futures moved up to $1,320.80 an ounce, up 0.47% on the day. 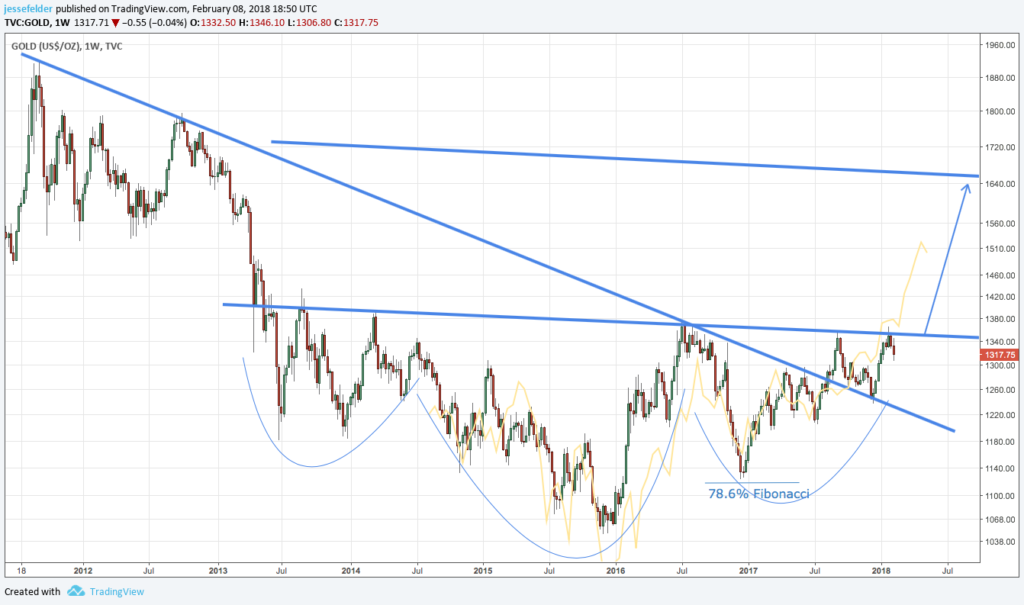 However, Felder is focusing more on gold’s relationship with the S&P 500 Index to make his forecast.

“There is a 97% positive correlation between the past six years in the gold/SPX ratio and that earlier 6-year period,” he explained. “In fact, it now looks like the gold/stocks ratio could have some serious catching up to do to the upside.”

According to Felder’s analysis, gold – relative to the broad stock market – is much “cheaper” today than it was back during its low in 2001. “Over the past 35 years or so, gold and the S&P 500 have essentially traded around parity. Should they see some sort of mean reversion now there are $1,300 points to be made up one way or the other,” he noted.

This reversion could mean more upside for gold prices, more so than the “head and shoulders bottom” pattern would suggest, he added.

“Today, there is a good technical case, as well as a fundamental case, for investors to overweight the precious metal.”