Excluding special items, adjusted earnings were $19.2 million, or 13 cents, compared with $19 million, or 12 cents, in the year-ago period. 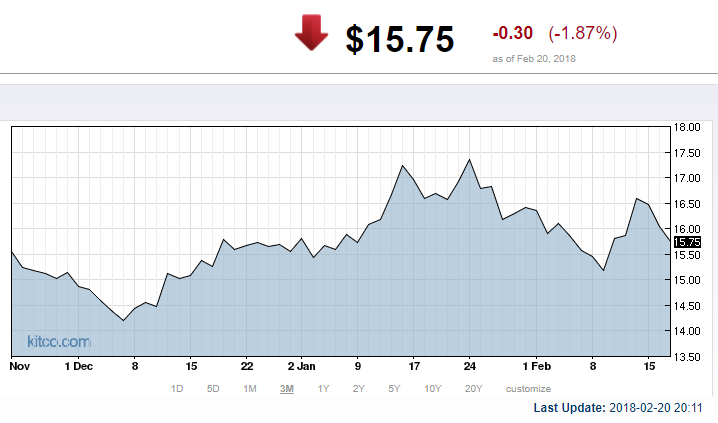 Fourth-quarter revenue of $226 million rose 19% from a year ago, which the company said was the result of higher sales volumes for most metals and also higher prices for all but silver. While mainly a silver producer, the company also mines gold, zinc, lead and copper.

The company reported a 40% increase in the quarterly cash dividend to 35 cents per share. This will be payable around March 16 to shareholders of record as of the close on March 5.

“Operations at Morococha have been performing particularly well, which has led to a reversal of the impairment we booked at that mine in 2015 and made a significant impact on earnings in Q4 2017."

Pan American said silver production in the fourth quarter was 6.58 million ounces, which was 4% higher year-on-year, primarily due to increases at Dolores, La Colorada and Morococha. Annual production of 25 million ounces was similar to the 25.4 million produced in 2016.

Production guidance for 2018 was unchanged from the company’s early-January announcement. Pan American expects to mine between 25 million and 26.5 million silver ounces this year and 175,000 to 185,000 ounces of gold.

"We added about 33 million ounces of new silver mineral reserves in 2017, more than replacing ounces depleted through mining,” said Christopher Emerson, Pan American's vice president business development and geology. “The silver grade of the mineral reserves increased by 13% to 94 grams per tonne, in part reflecting the additions of the new high-grade properties in Argentina."

Pan American said it spent approximately $18 million on exploration drilling in 2017 and will up this to $19 million in 2018.