The ETFs trade like a stock but track the price of a commodity, with metal put into storage to back the shares. Proponents say this creates a form of physical demand and also gives investors exposure to gold prices without having to deal with factors such as assaying and storing of metal. 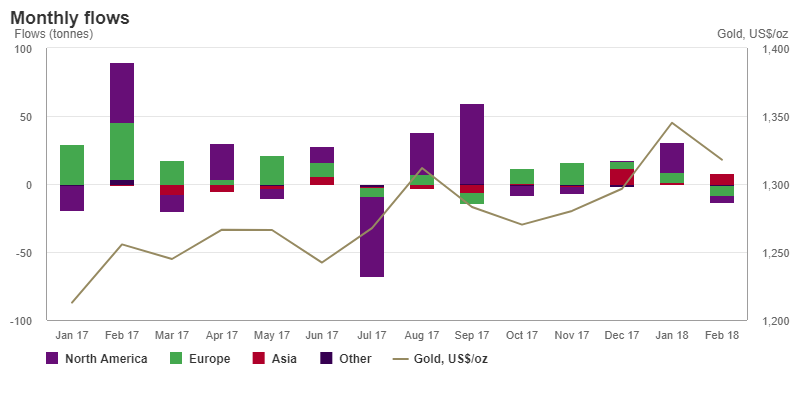 “Flows were negative as the price of gold decreased and its volatility increased,” said the Gold Council in a monthly report on ETFs. “This was reflected by higher trading volumes globally in ETFs and futures.”

Asian-listed ETFs added 7.9 tonnes to their holdings during February, while flows across the rest of the globe were negative, the WGC said. European funds lost 7.3 tonnes, while North American-listed funds had outflows of 5.1 tonnes. Funds in other regions had a marginal outflow of 0.7 tonne.

“Its sister funds – the I shares and the D shares – were closed to new money and inflows from investors buying shares through Alipay were directed into the listed fund, which is a reason for the growing inflows,” the WGC said.