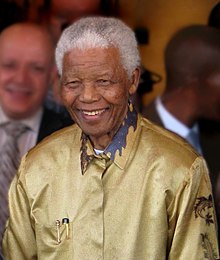 (Kitco News) - Bitcoin and gold investors might not be that different after all … at least when it comes to art. The latest odd buy in the art world was solid gold castings of Nelson Mandela’s hands, which were purchased for $10 million in bitcoin.

The four casts were owned by South African businessman Malcolm Duncan, who already tried to unsuccessfully sell them back in 2007.

Mandela was South Africa's first black President who served from 1994 to 1999 and is known as an anti-apartheid revolutionary and philanthropist.

“Mandela Art” is a well-known trend in South Africa, which is filled with controversy and accusations of forgery.

Many works have been destroyed under Mandela’s orders, but Duncan is sure that his castings are real, according to media reports.

“[Mandela] cut his thumb quite badly on Robben Island, his right thumb, and you can see it,” Bloomberg quoted Duncan as saying.

The gold cast of Mandela’s hand was made by Harmony Gold Mining Co. in 2002.

There are photographs showing the process of Mandela sitting in as Harmony Gold Mining Co. takes the cast of his hand.

The controversy surrounding the original sale is that Harmony was supposed to donate half the money to charity. Whether this happened or not remains unknown.

The new owner of the golden casts is the Canadian cryptocurrency exchange firm Arbitrade.

The exchange plans to showcase the “Golden Hands of Nelson Mandela” by organizing a global tour to educate youth about Mandela.

The sale was unique. Arbitrade made a bitcoin deposit worth $50,000 and the rest of the money has been scheduled to be paid in quarterly installments of at least $2 million beginning April 30.