(Kitco News) - In its continued bid to bring innovation to the precious-metals sector, one of the world’s biggest gold miners has embraced a new blockchain-based digital marketplace. 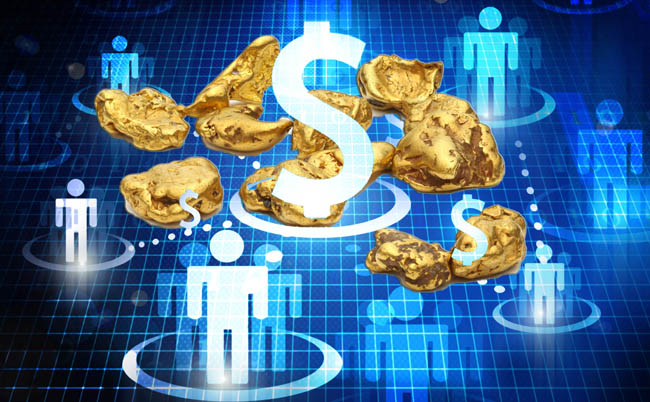 Goldcorp (NYSE: GG, TSX: G) announced Thursday that it placed 3,000 ounces of gold, valued at $4 million, in Tradewind Inc.'s newly launched digital market, VaultChain. Tradewind described the investment as the “genesis block,” the first block in a blockchain, representing a tremendous milestone for the technology and the sector.

“Goldcorp will be able to sell gold directly to dealers and banks using the Tradewind platform, expanding access to a new market structure and a highly efficient, electronic pricing and liquidity venue,” the company said in a press release.

“We are excited to be an investor in Tradewind and participate in the launch of VaultChain, a cutting-edge technology that integrates physical gold into a blockchain,” said David Garofalo, president and chief executive officer at Goldcorp. “We believe physical gold stored on a blockchain will increase the utility of the commodity and, ultimately, drive value in the price of gold. We are thrilled to be an early adopter of this 21st century platform and deposit its first bar of gold.”

Garofalo added that blockchain technology and the new VaultChain exchange has the potential to revolutionize the gold market in the same way exchange-traded products did more than 10 years ago.

Matthew Trudeau, president and co-founder of Tradewind, said that Goldcorp’s investment in VaultChain demonstrates the miner’s leadership and vision as an innovator within the gold market. He has said that he also expects that the technology has the potential to revitalize an industry that is seen by many as outdated.

Over the years, the mining sector has struggled to attract investor attention. Many market analysts have noted investors have ignored the mining sector in recent years, turning to more exciting markets like cryptocurrencies.

“Our platform enables the digitization of precious metals, beginning with gold. We believe this creates a modern, technology-driven means to own and trade physical gold that will be attractive to a new generation of investors that are digital natives,” said Trudeau in an email to Kitco News. “We believe that our technology will enable gold producers like Goldcorp to overcome existing limitations and move into the electronic age.”

Goldcorp was an early backer of Tradewind, which has been developing its digital exchange for nearly two years. Tradewind won investment capital from the mining giant in 2017 when it was a finalist in the inaugural #Disruptmining showcase.

The exchange has also received support from another gold-market heavyweight. According to reports, Sprott Inc. owns about 20% of the exchange and is expected to be an authorized dealer on the platform.

Tradewind was created as a spinoff company from IEX Group, which made headlines in mid-2016 after it launched a new equity exchange that incorporated delay in its platform for all trades. The concept behind the “speed bump,” was to level the playing field between high-speed trading algorithms and average investors.

The gold that is now on the exchange came from Goldcorp’s Red Lake Gold Mines complex. The gold trading on the new exchange will be vaulted with the Royal Canadian Mint.