(Kitco News) - Gold is likely to be bolstered by a falling U.S. dollar, which is under pressure despite rising bond yields, according to a U.K.-based research firm. 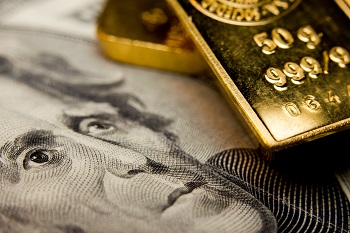 In a recent report, analysts at CrossBorder Capital said that a growing U.S. government deficit is likely to require funding by additional Treasury new issuance, driving bond yields higher. But counter intuitively, they expect that this will weigh on the U.S. dollar.

“[New bond issuances] can only add further upward pressure on yields across the U.S. curve. It is not U.S. dollar bullish because foreign demand for U.S. ‘safe’ assets is falling,” the report said.

While rising interest rates are typically bullish for the dollar, the report said that the world’s largest reserve currency is in a precarious position that makes it immune to rising rates, in what CrossBorder Capital calls the “Crisis Zone.”

The report likens the dollar’s current behavior to the “Carter Dollar” of the late-1970s during which “despite interest rate differentials widening in its favor, the USD exchange rate continued to slump.”

Analysts noted that the U.S. dollar’s deviation from historically positive correlations with rising rates can be attributed to a rising term premia, which suggest that U.S. safe-haven assets are less attractive.

“Term premia are a crucial factor in all asset valuation. They represent the excess yields required by investors to hold Treasuries above the expected value imputed from future policy interest rates,” the report said.

According to the research firm, term premia tend to be high when there is an excess supply of Treasuries, thus, President Donald Trump’s budget deficit would see government bond issuance drive term premia up.

Additionally, the report noted that money that has been heavily invested into U.S. safe-haven assets between the years 2012-2016 is now leaving the U.S. in favor of economic acceleration in Europe and Asia. A diminishing overseas appetite for U.S. safe-haven assets means more headwinds for the dollar as capital leaves the world’s largest economy.