Gold Could 'Suddenly' Become The 'Most Desirable Asset' - Strategist

(Kitco News) - With rising U.S. debt levels and tighter monetary policy, gold could quickly become the most appealing asset out there, according to one strategist.

“If more borrowing is the solution, then I expect gold prices will suddenly become a most desirable asset,” said macroeconomic strategist and managing partner at Spotlight Group Stephen Pope.

Gold and debt are highly correlated, according to Pope, especially with the U.S. debt levels already above $21 trillion.

“The U.S. government is under pressure to close the fiscal deficit and yet the U.S has started walking down a path leading to a trade war with China and Europe. At the same time the Department of Treasury announced plans to borrow nearly $1 Trillion this fiscal year,” Pope wrote in a FX Explained post published on Tuesday.

“What is clear is that the U.S. Treasury cannot continuously keep raising the debt ceiling to meet the federal government’s borrowing needs with no apparent serious limit in sight. Given the Fed’s programme of QE is being tapered, one wonders what increase in yields will be required to get the debt placed at each successive auction?” he added. 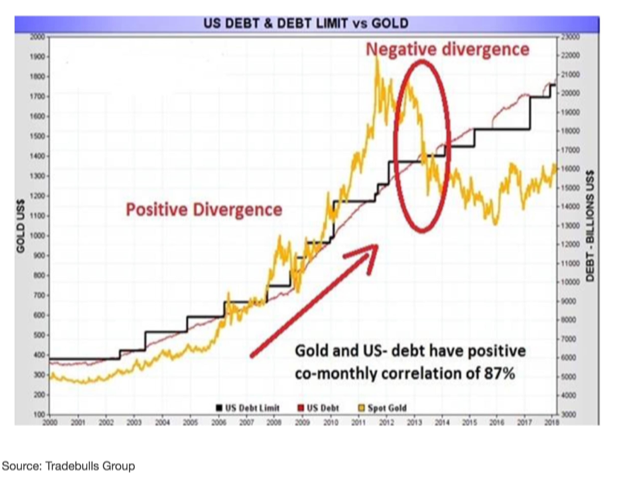 “Certainly, the past few years of record low-interest rates inflated major asset prices in form of stocks, bonds and real estate,” he said. “Rising rates not just apply to government debt, they will also have a major impact on corporations and individuals.”

What this could lead to is an increase in corporate bankruptcies in 2018.

“A sudden increase in unemployment [could] see property prices fall all at a time when the U.S. government will see more dollars leak from the system [as they] pay more interest on their debt.”

Gold prices gave up all of Wednesday’s gains related to escalating trade war fears in the afternoon and early Asian trading on Thursday.