The inflow in March was a significant increase compared to the previous month’s net change in holdings, which slipped by 5.1 tonnes.

According to a monthly report on ETF fund flows by the WGC, holdings stood at 2,415 tonnes at the end of the month, worth $102.8 billion.

Worldwide gold holdings of ETFs have been on a steady uptrend since 2017, mirroring gold’s steady price ascension; the yellow metal gained 16% since the start of 2017. 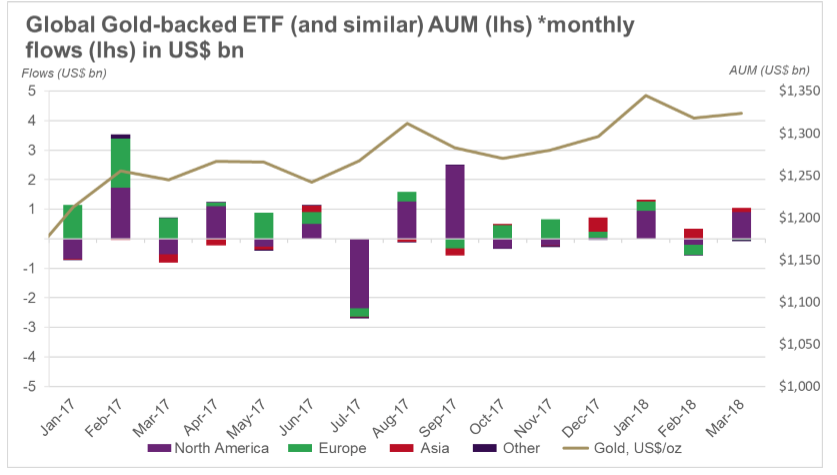 “Global inflows were dominated by North American-listed funds which added 21.5t (US$917mn, 1.7% AUM) to their holdings during March,” the report said.

Inflows in the U.S. and China reflected broad market uncertainty, the WGC said. The inflows came when President Donald Trump announced import tariffs on steel and aluminum, targeting $50 billion worth of Chinese goods.

China’s retaliatory tariffs spiked fears of a global trade war and briefly spooked the markets, sending he S&P 500 down more than 2.2% Monday, the worst start to April since 1929, before rebounding during Tuesday’s and Wednesday’s sessions.

ETFs in Asia added 3.1 tonnes, growing assets by 13.4% through the first quarter. The region saw holdings bolstered almost entirely by Bosera Gold ETF (CH: 159937). The fund has grown 40% on the year, adding 11 tonnes, according to the report.