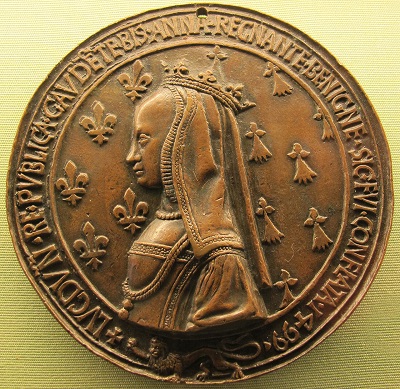 (Kitco News) - Thieves in France got away with the priceless 16th-century gold case that once contained the heart of Queen Anne de Bretagne — the only woman who was crowned queen of France twice.

The disappearance of the gold case has really angered the local population, who say that the historical value of the piece is immeasurable.

The case even survived not being melted down during the turbulence following the French Revolution in 1789.

“The thieves attacked our common heritage and stole an item of inestimable value. Much more than merely a symbol, Anne de Bretagne’s heart belongs to our shared history. Queen Anne, Duchess of Brittany, had wished that her heart be buried with her parents,” said Philippe Grosvalet, the president of the Loire-Atlantique department.

The item was stolen from the Thomas-Dobrée museum located in the city of Nantes in western France, which owned the item since 1886.

The suspects broke into the museum over the weekend and walked away with the 6-inch oval gold case even after triggering the alarm.

Local authorities spoke out, pleading with the robbers not to melt down the gold case for its precious metal value.

“If by any chance the thieves were motivated by the fact that it is shiny and made of gold, they should understand that its historical and symbolic value far outweighs its 100 grams of gold,” said Catherine Touchefeu, Loire-Atlantique’s departmental councilor.

Anne de Bretagne was first married to Charles VIII of France in 1491. Following his death, she was then married to Louis XII in 1499.

Anne de Bretagne was raised in Nantes and after her death in 1514, one of her requests was that her heart remain in the city, while her body was buried in Paris.