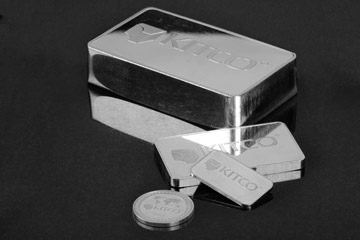 (Kitco News) - Even with Wednesday’s silver rally, the precious metal is still significantly undervalued, said Goldmoney. But, all of that is about to change, with a more than 30% jump in prices coming our way.

“Silver prices are trading almost 25% below the values predicted by our price model,” Goldmoney’s VP and lead researcher Stefan Wieler said in a report published on Wednesday. “This is the largest downside deviation we have seen in over 25 years.”

The reason for such a gap between where the prices are and where they should be is the massive short selling in the futures market, the report stated, adding that it is unsustainable and that a major reversal is inevitable.

“Over the past 12 months, speculators sold over 600 million ounces of silver in the futures market. This exceeds the previous record three times since the data began in 1990,” Wieler said. “In order to maintain this downward pressure on silver, speculators would have to continue to sell over 500 million ounces of paper silver per year. A reversal of this positioning could lead a >30% rally in silver prices in our view.”

Even a slight decline in net selling would boost silver prices hogher, the report added.

“In a more balanced spec market, meaning buy and sell flows offset each other, silver prices should return to the model-predicted value of USD21/ ozt, which is 30% higher from here,” Wieler explained.

Some of the main drivers for silver include monetary demand as well as industrial supply and demand, the researcher said.

“A large part of the changes in the price of silver can be explained in a regression analysis using just a few drivers: gold prices, TIPS yields, and changes in silver ETF holdings (representing the monetary demand for silver) as well as U.S. industrial production and the ISM manufacturing PMI (the industrial demand for silver),” Wieler wrote. “Indeed, these drivers explain close to 80% of the year-over-year changes in silver prices in a multi-variate regression analysis.”

A jump in crude oil helped the precious metal out on Wednesday, according to Kitco’s senior technical analyst Jim Wyckoff.

“A solid rally in the crude oil market today that saw Nymex futures push to a 3.5-year high above $68.00 a barrel also helped out the precious metals bulls today. Crude oil is the leader of the raw commodity sector, and its ‘rising tide’ is lifting many of raw commodity sector boats,” Wyckoff said in his PM Roundup.

Silver’s performance is especially impressible amid a keener risk appetite in the marketplace, added Wyckoff.