(Kitco News) - Four major gold producers are betting that a new digital gold market will bring millennials to the table and revitalize the marketplace. 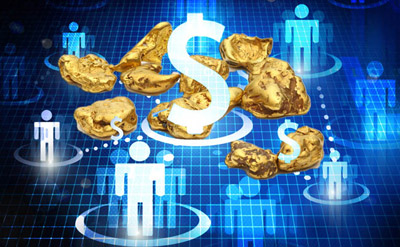 “This strategic placement, led by producers, reflects the rapidly evolving landscape for trading precious metals and demonstrates growing support for the Tradewind platform as the leading solution for the industry,” said Fraser Buchan, co-founder of Tradewind in an interview with Kitco News. “We’re excited to work with our shareholders and partners to continue driving innovation and positive change.”

Matthew Trudeau, president, and co-founder of Tradewind said that the demographics within the gold sector are changing and a digital platform that allows investors to buy fractional quantities of gold will allow companies to reach untapped potential, specifically millennials.

“Everyone thinks millennials don’t have any money, but that isn’t accurate,” said Trudeau, “We are sitting on the cusp of the biggest transfer of wealth in history.”

Fraser added that through Tradewind’s new platform the gold sector will be able to attract younger investors that are looking for important diversification from volatile markets like cryptocurrencies.

“This is the world we now live in. This the way companies have to engage with potential investors,” he said. “At some point, all these young investors will start to see the value of holding an asset like gold.”

Although the platform is relatively new, Fraser and Trudeau said that they expect to see the market and network continue to grow; they explained that the pipeline of potential new liquidity providers looks “particularly strong” as up to 20 gold-sector companies have shown an interest in the technology.

While the company is focused on digitizing gold, the team has its eyes on the horizon as they say the technology can be used for all markets, particularly other precious metals like silver and platinum group metals. Fraser noted that the platform could also be adapted for base metals and other commodities.

Although Tradewind has the most advanced digital platform in the gold market, there is growing competition on the horizon. However, Fraser said that this just proves that his company is on the right track.

The company has spent almost three years developing the technology behind its platform and making the connections among key market producers and dealers, the two founders explained.

“Tokenizing gold has failed and will continue to fail. You can't succeed unless you put in the work to understand the market,” added Fraser. “We have spent the last three years putting in the work and that is why our new market will succeed.”

Tradewind was created as a spinoff company from IEX Group, which made headlines in mid-2016 after it launched a new equity exchange that incorporated a delay in its platform for all trades. The concept behind the “speed bump,” was to level the playing field between high-speed trading algorithms and average investors.