Coin Turns Out To Be Real And Worth Millions 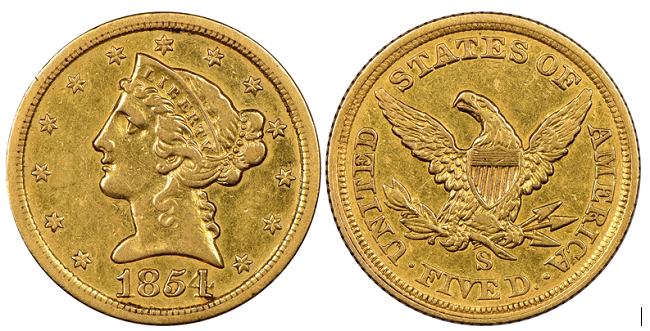 (Kitco News) - Sometimes it pays to get a second opinion at least it did for one New England man who found out that his once-believed fake gold coin, which dates back to 1854, is real and is worth millions of dollars.

According to reports, the coin owner, who has requested to remain anonymous, believed his small gold coin with a $5 denomination from the San Francisco Mint, made during the height of the California Gold Rush, was a fake. All the dealers he took the coin to also said it wasn’t real because there were only three of these coins in existence. Well now there are four.

The Numismatic Guaranty Corporation in Sarasota, Florida, the world’s largest rare coin authentication company recently appraised the coin and said it was genuine.

“It’s like finding an original Picasso at a garage sale. It’s the discovery of a lifetime,” said Mark Salzberg, chairman of NGC in a press release. “[The owner] was stunned when we informed him that it is a genuine, multi-million dollar rare coin.”

Mint records indicate just 268 of them were made in San Francisco in 1854, the first year that coins were produced there. According to the NGC, one of the historic coins is held by the Smithsonian Museum, the second coin is owned by a Texas family, and the third coin hasn’t been seen since it was stolen in 1967.

Jeff Garrett of Lexington, Kentucky, a rare coin consultant to the Smithsonian and a former President of the American Numismatic Association, described the revelation of the coin’s existence as “a stunning discovery” after Montgomery showed him images of it.

“It’s always exciting when something like this appears. It’s amazing that a coin of this magnitude could come out of the woodwork,” Garrett said. “It’s like the ‘Antiques Roadshow;’ a very exciting discovery!”