(Kitco News) - Gold demand is off to a slow start in 2018, as first-quarter results from the World Gold Council (WGC) revealed the lowest level in 10 years.

The WGC blamed poor gold-bar demand as well as disinterest in gold-backed exchange-traded funds (ETFs) for the “quiet” start to the year.

“A subdued gold-price environment hampered demand,” said the report. Data was provided to the WGC by the consultancy Metals Focus. 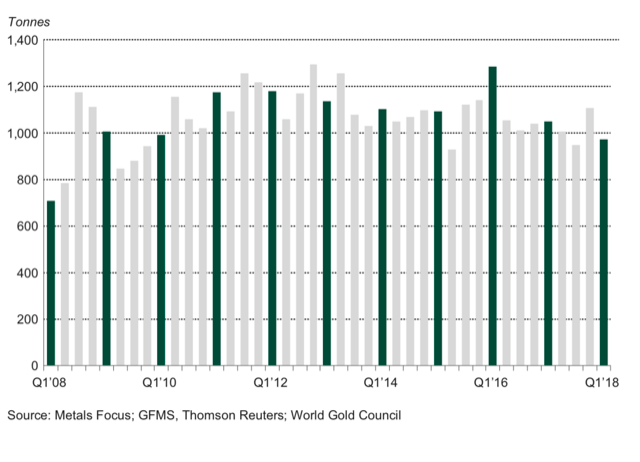 Global investments into gold bars and coins dropped 15% to 254.9 tonnes, led by poor figures coming out of China, Germany and the U.S.

ETFs saw inflows of 32 tonnes in the January-March period, down 66% from last year’s first quarter. The biggest moves came from the North American-listed ETFs, but most gains were offset by European- and Asian-listed funds.

Global jewelry demand was also unimpressive, edging down 1%, with only 488 tonnes added in the first quarter. The sector was dragged down by Indian consumers feeling the pressure of higher gold prices and a weakening rupee, with local demand down 12%.

But, the WGC noted that Chinese and American jewelry markets saw an improvement, with the latter reporting the highest results in nine years.

The bright spot in the report was central banks continuing their efforts to expand reserves. This time around, the banks added 116 tonnes, up 42% from the first quarter of 2017, the gold-focused organization reported.

“This was the highest Q1 total for four years and in line with average quarterly purchases since Q2 2010 of 115 tonnes. Russia, Turkey and Kazakhstan again dominated the list of central banks buying gold, adding 91 tonnes between them,” the report stated. 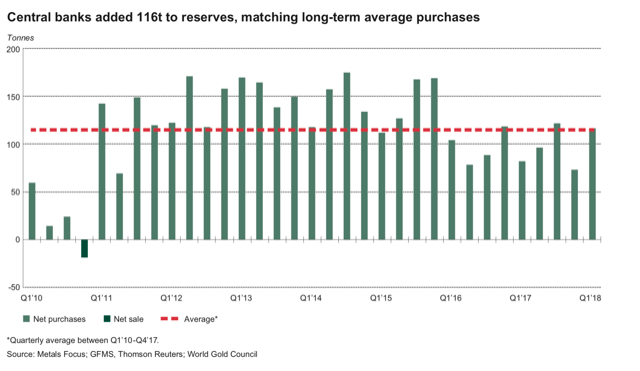 Also, use of gold in the technology sector continued to improve, rising 4%, led by the wireless sector, which employed 3D sensors for facial recognition.

Alistair Hewitt, the WGC’s head of market intelligence, described the overall environment for gold as “stable” during the first quarter.

“Although demand was down year-on-year, we saw encouraging levels of jewelry demand in China, the U.S. and Europe, continued growth in the technology sector, and steady inflows into ETFs, albeit at a slower pace than last year. Solid inflows into central-bank reserves also highlight the ongoing relevance of gold as a strategic asset for institutional investors,” Hewitt said in a press release.

The supply side of the equation advanced to 1,064 tonnes in the first quarter, up 3% on increased mine production. “Mine production and recycling levels both saw fractional increases compared with Q1 2017, at 770 tonnes and 288 tonnes respectively,” the report specified.