(Kitco News) - After the biggest weekly drop in five months, gold bulls are not ready to give up their tug of war against the bears just yet, according to analysts.

As gold gets ready to close the week below $1,300 an ounce for the first time this year, analysts are scrambling to project where the yellow metal might head next when the dust finally settles.

Analysts are optimistic that gold is not going to fall below $1,280-$1,260, with some pointing to a good buying opportunity.

“From a pure trading perspective, I would be a buyer at $1,280,” Todd ‘Bubba’ Horwitz, chief market strategist of BubbaTrading.com, told Kitco News on Friday.

“We don’t expect prices to fall much further over the next few months. Below $1,300 we can see some bargain hunting.” 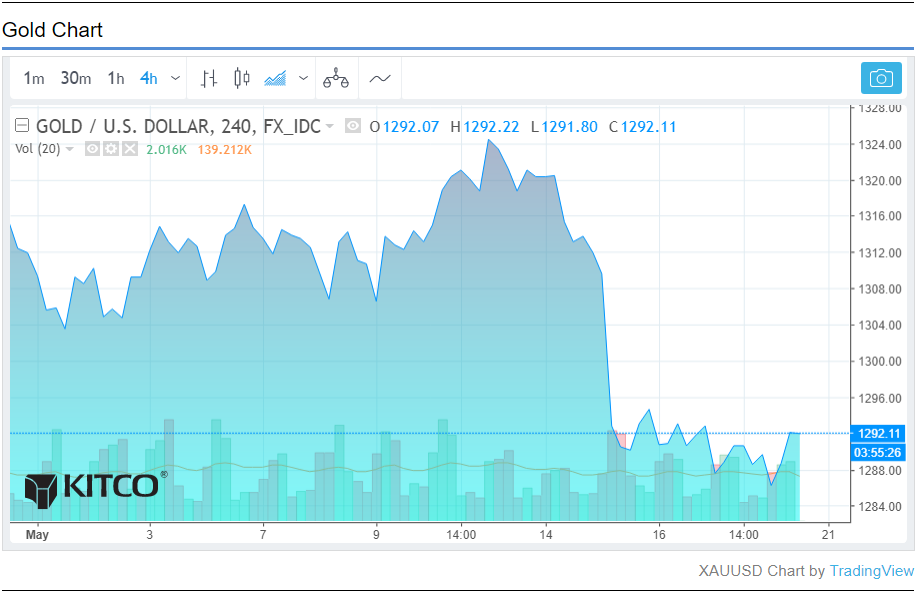 Markets will need to see the U.S. dollar cool off before gold can rise above $1,300 again, TD Securities commodity strategist Ryan McKay pointed out. “The big driver will continue to be the U.S dollar. It is approaching 94 on the DXY here and that adds some downward pressure,” he said.

Gold will improve its standing as it enters the second half of the year, added McKay, noting that the Federal Reserve will play a major role in this.

“We see gold heading towards $1,330 or maybe higher in the second half of the year. The Fed might not be as aggressive as the market is pricing in right now. The yield curve is still fairly flat and the Fed has signaled that they are willing to let inflation overshoot for some time,” he said. “The Fed [will stick] to a go-slow approach and we will see the dollar weaken from where it is now, which will be positive for gold prices.”

Gold And The Other Metals: Are You Committed To Your Strategy? https://t.co/oMquzDGi7Z pic.twitter.com/k3ppAEoOz6

Geopolitical tensions could offer the biggest, but temporary, boost to gold prices in the short-term, Gambarini pointed out.

“A flare-up in geopolitical risks could see prices rise, but we don’t see that being sustained for long,” she said. “We have the Iranian situation, then Middle-East tensions in Syria, trade war between U.S.-China, and the U.S. sanctions against Russia.”

All of the above risks are not new to the markets, but any potential increase in tensions could lift demand for the safe-haven investments, according to Gambarini.

Analysts are carefully watching Wednesday’s release of the FOMC minutes from the May meeting.

“[The FOMC minutes are] probably the only big piece of news that could move the market next week,” said Gambarini. “[It will all depend] on how worried the Fed is about inflation and how likely it is to hike interest rates more aggressively if it thinks that inflation is getting out of hand. In that case, we could see some weakness in prices.”

Despite being the major news release this week, some analysts are not expecting much of a market reaction on Wednesday.

“Given that the Fed’s decision to leave rates unchanged in May was unanimous and there was little to suggest a major shift in the policy outlook, the minutes may end up passing with little fanfare,” Capital Economics U.S. economist Andrew Hunter told Kitco News.

Some new insights from the minutes could be about the Fed’s thinking around inflation and an explanation for the change in the central bank’s statement describing inflation as “expected to run near the Committee’s symmetric 2 percent objective,” added Hunter.

“In particular, the word ‘symmetric’ may have been intended as a sign that officials will let inflation overshoot the target for a temporary period,” he said.

“On the one side, we have Fed tightening, which is negative for gold and, on the other side, we have rising inflation and potentially some physical demand coming back to the market, which are positive factors for gold,” she explained. “These are the reasons why we think prices will land around where they are now by the end of the year.”

Other important items on the agenda next week are U.S. durable goods orders report and a speech by the Fed Chair Jerome Powell, both scheduled for Friday.