(Kitco News) - Could higher oil prices rub off on gold? Capital Economics thinks so, pointing to an interesting relationship between oil and the yellow metal.

Oil prices have been rising since mid-February. Brent crude oil price, for example, jumped 21% since the start of the year.

Most of the rally, however, has been driven by concerns around supply, according to Bain, which is why the correlation between oil and other commodities has not been as visible.

“The big picture is that the non-oil commodity indices and oil typically move in the same direction,” she wrote.

When it comes to gold in particular, investors are more prone to owning the precious metal when they are holding riskier asset such as oil, Bain pointed out, noting that gold is a safe-haven and a traditional hedge against inflation.

“If oil prices rise, this is likely to feed through to higher inflation expectations and could prompt buying of gold (in particular) but also other commodities as a hedge,” Bain said.

But, Bain added that for the correlation to feed through, oil will need to remain at a high level for a long time, which she does not see happening this and next year.

“We forecast that the price of oil will fall back as fears over supply prove unfounded and growth in demand softens. We expect the price of Brent to fall to $55 per barrel by end-2019, down from nearly $80 today,” Bain said. 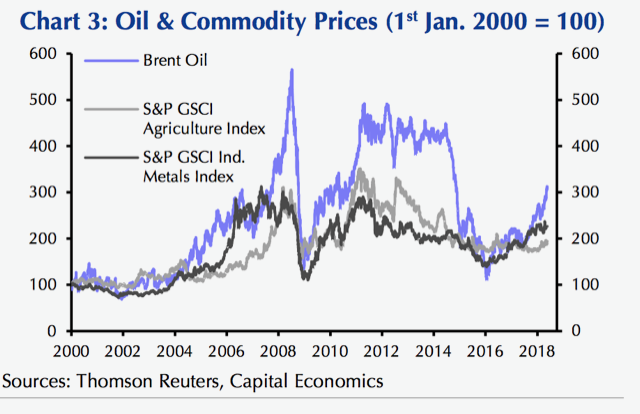 Capital Economics also acknowledged that aside from temporary rallying oil, gold will still remain under pressure due to Federal Reserve’s tightening cycle. “Our forecast that the Fed will raise interest rates by more than the market anticipates is likely to weigh on the price of gold,” she stated.

Bain’s report comes at a time when gold prices managed to recover above $1,300 an ounce on Thursday after last week’s tumble below the key psychological resistance level for the first time this year.

“Trump's scuttling of the summit with North Korea is not surprising, but it still produces an uptick in geopolitical uncertainty, which is bullish for safe-haven gold and silver,” Kitco’s senior technical analyst Jim Wyckoff said after the announcement.