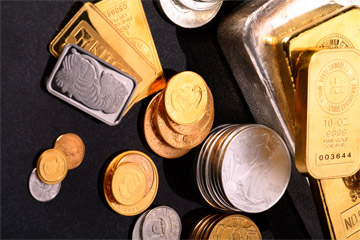 (Kitco News) - Gold will have a better month in June following a drop below the key psychological level of $1,300 an ounce in May, said INTL FCStone, adding that the U.S. dollar rally will run out of steam.

The yellow metal prices are likely to trade between $1,280-$1,335 an ounce in June, wrote INTL FCStone analyst Edward Meir in a report published on Sunday.

One of the central triggers to give gold a reprieve is a stalling U.S. dollar, led by the sentiment that the Federal Reserve’s June rate hike has already been priced in by the markets.

“Once [the rate hike] is out of the way, the market will be focusing on the next and potentially last move before the Fed stops for a while. We also think that the rate picture may have run its course as well, at least for now,” Meir said.

Trade war rhetoric will also play a central role in driving gold prices in June, the report pointed out.

“A steadily deteriorating trade situation is arguably bearish for the dollar (and bullish for gold), but should the situation improve, we could see the dollar rally and pressure gold in the process,” Meir said.

On top of that, there are a number of geopolitical risks to keep in mind as the summer gets going, including Italy, Spain and North Korea, the analyst added.

“Italy and Spain, the region’s most heavily indebted countries (after Greece), continue to struggle politically, although the worse seems to be over,” he said. “The other major event will fall on June 12th, which is when President Trump is supposed to meet with the North Korean leader. Any semblance of a rapprochement will be net bearish for gold, albeit temporarily, since political events tend to have a short-term impact on prices.”

Gold prices surprised the market in May by hitting a fresh 2018 low of $1,280 an ounce, pressured down by strong U.S. dollar and rising U.S. yields.