(Kitco News) - The growing threat of a trade war is not great news for commodity markets as it could reduce global demand as economic growth prospects falter.

However, one junior mining explorer thinks copper is in a position to withstand the protectionists’ assault on global markets and global growth as the base-metals market faces a significant imbalance in its supply-and-demand fundamentals.

“Trade wars are never very helpful for the global economy. As we know in the copper space, GDP growth equals copper demand growth,” said Luquman Shaheen, president and chief executive officer of Panoro Minerals, in an interview with Kitco News. “There is no doubt that a trade war will impact near-term demand on copper.”

But Shaheen added that demand isn’t the primary issue that is driving copper prices, which are above $3 a pound. Comex July high-grade copper futures last traded at $3.1225 a pound as prices have been trading in an elevated range for most of the year.

A dearth of investment in new copper projects in the last seven years is taking its toll on the copper market, said Shaheen, adding that this will continue to support prices in the long term.

“The lack of new projects has been the root behind the drive in price from sub-$2 a pound to as high as $3.35 we saw at the start of the year,” he said. “That supply-side issue doesn’t turn on a dime. It is going to take many years to resolve this problem.” 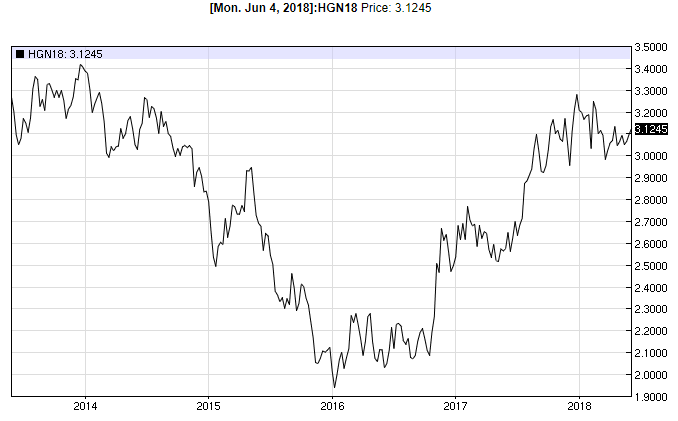 While some major copper companies have projects on the shelf ready to be developed, Shaheen said that the price still isn’t high enough for companies to pull the trigger just yet. He added that because of the market’s high capital-expenditure costs, companies need to see copper prices around $3.50 a pound to be economically viable.

However, Shaheen said that he sees an opportunity to market his company’s projects to hungry producers looking for feasible supply.

While most companies were dealing with a bear market from 2012 to 2016, Shaheen said that Panoro was quietly working away developing and derisking its Cotabambas and Antilla projects in southern Peru.

“Since 2012, we invested a fair bit of money in growing and defining our resource, and we now have two copper assets that are ready to move along the development pipeline,” he said. “There are very few copper projects that have advanced from early stage discovery through to resource definition, and Panoro is one of the few exceptions.”

Shaheen added that he is confident that as supply continues to shrink, the work his company has completed on its Cotabambas copper-silver-gold and Antilla copper-molybdenum projects will attract a major producer that will take a project to production.

Although copper prices have been capped in the $3.10 range, Shaheen said that the potential for higher prices makes this the perfect environment for mergers and acquisitions.

“Money is starting to flow back into the sector and I think we are at the early part of the M&A cycle. This will only grow as the sector sees more investor confidence,” he said.