(Kitco News) - It’s only a matter of time until gold breaks above $1,300 an ounce and climbs to $1,400, said ING, adding that a weaker U.S. dollar, U.S. debt, and positive physical demand will support the precious metal.

“We forecast prices averaging $1400/oz in 2Q 2019 as the dollar resumes a decline and U.S. twin deficits return to the foreground,” ING commodities strategist Oliver Nugent said in a report published earlier this week.

So far, gold’s reaction to U.S. tariff announcements against Canada, Mexico and the EU has been almost unnoticeable, said Nugent, adding that the most exciting time for the yellow metal could still be ahead as the G7 summit is set to begin on Friday.

“These tensions are expected to come to a head at this week’s G-7 leaders summit and any escalation ought to play to gold’s haven qualities receiving a double whammy for any confidence taken out of the greenback,” Nugent pointed out.

Also, physical fundamentals are set up right to provide support for the precious metal, including Swiss gold export data from April, which showed the first four months as registering a 2% year-over-year increase, largely driven by Chinese demand, according to ING.

Gold has been suffering from low fund flows and easing geopolitical tensions, which have been putting toward pressure on prices.

Even a recent drop in treasury yields failed to have a significant impact on gold prices, said Nugent.

“Since it's peak two weeks ago (May 16th) US treasury yields have fallen hard, boosting gold’s appeal as a non-yielding asset and supporting a brief break above $1300/oz. The ten year has dropped from a high above 3.1% to a low of 2.78%, before recovering slightly but still remains below the psychological 3%.”

One of the reasons for gold’s tepid response to falling treasury yields is a lower inflation outlook.

“This yield collapse would have been more positive for gold, except that inflation expectations also fell. A collapsing oil price (WTI -9.5% since May 16th) seems to be the prime culprit,” Nugent pointed out. “The yield spread still remains well up on December, so our longer-term view for higher gold prices based on higher inflation remains unchanged.” 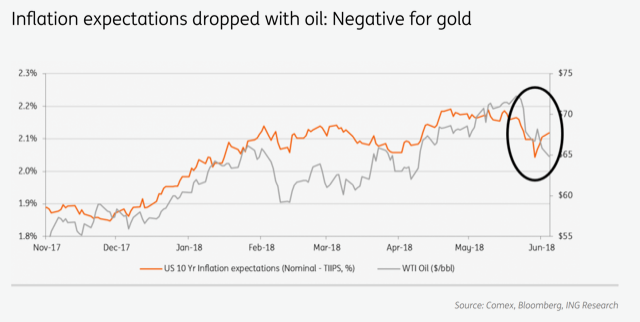 Working in favor of gold long-term is the Federal Reserve’s possible willingness to let inflation run above its 2% target.

“While a June rate hike is all but certain, the FOMC minutes show an increasing tolerance towards inflation above 2% and continued concern towards the flattening yield curve,” Nugent wrote. “Any potential for derailing the future path of Fed rate hikes are positive for the longer term allure of holding gold as a non-yielding asset and help form our view that gold will shine brighter this time next year.”

“This highlights both the simultaneous unraveling of geopolitical tensions and golds ongoing difficulty this year for attracting and sustaining decent fund flows,” Nugent said. “We don’t see much geopolitical risk being priced in: Italian politics has stabilized, Spain’s presidential exit is all but confirmed and the North Korean - US summit is back on.”