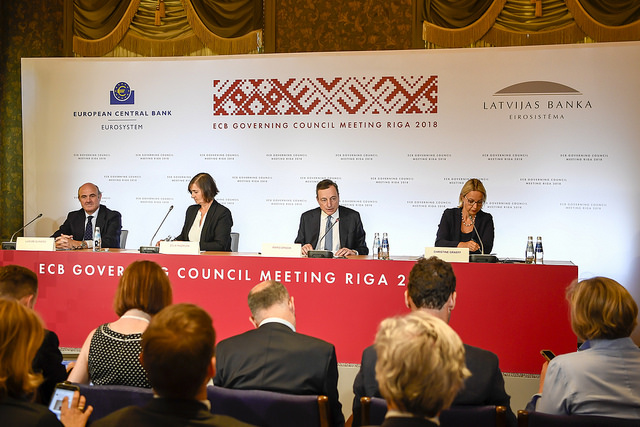 (Kitco News) - Gold managed to keep early-morning gains as European Central Bank (ECB) President Mario Draghi said there will be no move on rates at least through the summer of 2019, while adding that the quantitative easing (QE) program will end in the end of the year.

“We decided to keep the key ECB interest rates unchanged and we expect them to remain at their present levels at least through the summer of 2019 and in any case for as long as necessary,” Draghi said during a press conference, which followed the ECB’s decision to leave rates unchanged on Thursday.

The precious metal was able to ignore euro’s fall and the recovery in the U.S. dollar, still trading near two-week highs.

“Today’s monetary policy decisions maintain the current ample degree of monetary accommodation that will ensure the continued sustained convergence of inflation towards levels that are below, but close to, 2% over the medium term,” Draghi said.

Draghi also cut eurozone’s growth outlook for this year to GDO increasing only 2.1%, down from 2.4% estimated in March.

“These projections foresee annual real GDP increasing by 2.1% in 2018, 1.9% in 2019 and 1.7% in 2020,” Draghi explained. “This moderation reflects a pull-back from the very high levels of growth in 2017, compounded by an increase in uncertainty and some temporary and supply-side factors at both the domestic and the global level, as well as weaker impetus from external trade.”

Draghi referred to the underlying strength of the economy in the medium-term as “adequate,” noting that current risks “warrant monitoring.”

ECB’s decision comes a day after the Federal Reserve raised its interest rates by 25 basis points on Wednesday, bringing the the federal funds rate to a range between 1.75% and 2.00%.