FIFA World Cup: How Much Is The Gold Trophy Worth? 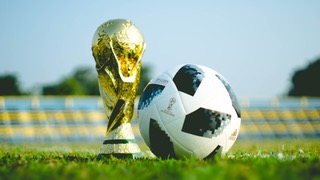 (Kitco News) - As the excitement around the FIFA World Cup grabs the attention of all sports fans around the world, gold bugs are looking at the trophy itself, which is not only made of gold but is also considered to be one of the most valuable sports prizes out there.

The current FIFA World Cup trophy is made out of 13.5 pounds of 18-carat gold.

The dimensions of the trophy, which depicts two athletes holding up the Earth in their hands, is about 14.5 inches tall, with a base of 5.1 inches in diameter.

The value of the trophy varies, with USA Today reporting that it could be worth $20 million, while other estimates point to $150,000. Kitco.com’s scrap calculator prices the trophy at more than $188,000.

The coveted trophy has been used since 1974 and was designed by an Italian artists Silvio Gazzaniga, who competed against 52 other sculptors.

There are reports that the trophy is hollow inside.

The trophy is presented every four years to the winning team at the end of the World Cup’s final match. Thos year’s final FIFA match is scheduled for July 15.

Before each World Cup, the trophy gets re-polished by Italian company GDE Bertoni and the previous winner gets to keep a gold-plated replica of the coveted prize.

The FIFA World Cup Trophy is one of the most sought after and prestigious prizes in international sports. It is made of none other than 18k Gold. #Goldmoney pic.twitter.com/Mw30FBF0g5

Germany is the current trophy holder, but Brazil has the most World Cup victories.

Prior to this 18-carat gold trophy, the Jules Rimet Trophy was used from 1930 to 1970, which was made out of gold plated sterling silver and lapis lazuli. The trophy depicted the Greek goddess of victory Nike. But, in 1970 it was stolen and never recovered.