What Will Gold Do In ‘An All-Out Trade War'? 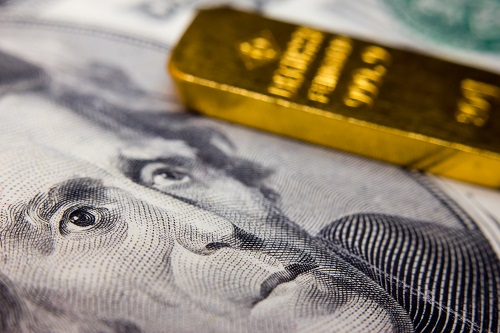 (Kitco News) - The current lull in the gold market will be shaken up by the ongoing trade tensions between the U.S. and China, boosting prices and the yellow metal’s safe-haven appeal, according to Capital Economics.

“We expect the prospect of increased protectionism to be positive for gold prices,” the research firm’s commodities economist Simona Gambarini said in a Metals Watch note published on Tuesday.

The impact of a full on trade war will force investors out of risky assets and into safe havens, leading to an equities sell-off and increased interest in gold, Gambarini explained.

But, the impact of trade rhetoric on gold will in the end of the day depend on what the U.S. dollar does in the short- to near-term.

“In the event of an all-out trade war, we can expect the greenback to continue to make headway against most emerging market and developed market counterparts, with the exception of safe-haven currencies,” said Gambarini. “A stronger U.S. currency is likely to act as a headwind for gold prices, at least partially offsetting the positive impact of higher demand for safe-havens and inflation hedges.”

Considering the U.S. dollar strength, gold’s rise is looking limited: “Our view that the price of gold will end 2018 at around $1,300 per ounce, up slightly from the current level of $1,274,” the report added.

Gold saw a massive drop last week, which was likely triggered by a delayed reaction to higher U.S. dollar as well as mismatched inflation expectations amid lower oil prices, Capital Economics pointed out.

“Following an escalation of tensions between the U.S. and China last Friday, the price of gold was caught up in the wider commodities selloff,” Gambarini said. “Some commentators have attributed the decline in the gold price to the slump in the price of oil. Gold is often considered an inflation hedge and lower oil prices would inevitably lead to lower inflation.”

But Capital Economics disagrees, as oil prices are still up 51% in comparison to last year, which points to building inflationary pressures. 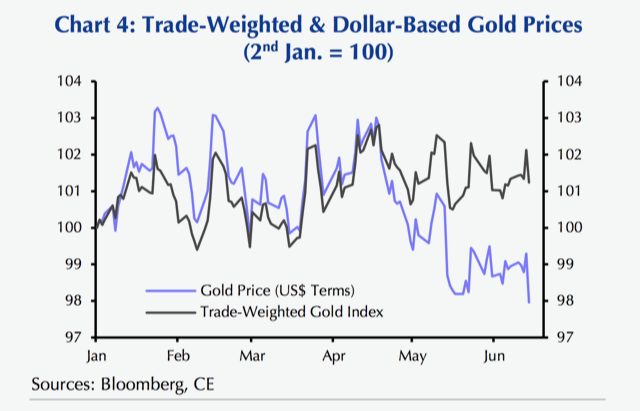 The dollar always plays a big role when it comes to gold prices, but its role has been especially noticeable in the last couple of months.

Capital Economics noted that gold prices would be much higher if the dollar effect was stripped out of the equation.