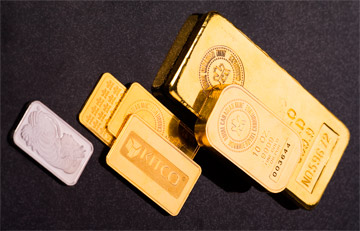 (Kitco News) - The gold market saw a small uptick after the release of preliminary manufacturing and service-sector sentiment data.

The flash U.S. manufacturing Purchasing Managers Index for June expanded at a slower pace, coming in at 54.6 in comparison to May’s 56.4, research firm IHS Markit said in its latest report. The monthly figure came in short of market projections, which called for 56.3.

At the same time, the firm’s service sector PMI reading was at 56.5 in comparison to May’s 56.8. Economists were projecting for the index to edge down to 56.4.

Any monthly reading above 50 points to an expanding sector, while anything below that shows contraction in activity.

“Bulls are working to stop the bleeding in their precious metal. It’s been a rough one-week trading period for the gold bulls, as prices dropped from a high of $1,313.00 on June 14 to a low of $1,262.40 on June 21, basis August Comex futures,” said Kitco’s senior technical analyst Jim Wyckoff.

“The flash PMI surveys add to evidence that the U.S. economy is enjoying a strong second quarter … The latest numbers round off the best quarter for three years, and suggest economic growth has lifted markedly higher than the 2.3% rate of expansion seen in the first quarter to well over 3%,” Williamson said.

The report also noted that input cost inflation is rising at the fastest pace in nearly five years, which is a positive sign for gold prices.

Many investors see an investment in gold as a traditional hedge against inflation.