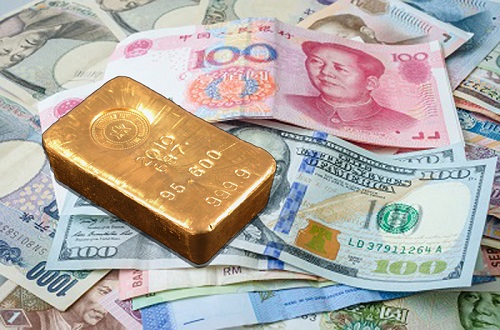 (Kitco News) - The recent sell-off in the commodities space was not “fundamentally warranted,” according to the Bank of Montreal (BMO), which views gold as a “natural” defensive play if tensions between the U.S. and China escalate into a full-blown trade war.

“From a fundamental perspective, commodities are still in a good spot. We continue to revise higher our demand estimates for 2018, and the vast majority of commodities are trading out of the cost curve in an effort to attract additional supply to market,” BMO Capital Markets analysts wrote in their Q3 Commodity Price Update report published on Wednesday.

One of the biggest geopolitical risks on the horizon is the escalating trade war rhetoric between the U.S. and China, according to the report.

The trade tensions are weighing on commodities, especially when it comes to concerns around future demand.

“Clearly, trade frictions are weighing on future demand expectations, and we would argue current commodity prices are factoring in a significant H2 slowdown,” analysts wrote.

But, if the world was to see a full-blown trade war between the U.S. and China, then all industrial commodities would suffer, but gold would be a “natural defensive play in that environment,” BMO pointed out.

The bank projects for gold to average $1,320 an ounce in 2018, which is 1% lower than its previous estimates for the year.

Unfortunately, what this means for gold, according to BMO, is that prices will not be trading above their key psychological level of $1,300 an ounce on a sustained basis for the next four years.

“The factors which drive gold continue to pull it in numerous directions, with the net effect of keeping it stuck in a range,” analysts wrote.

Peter Hug weighs in on the next key levels for gold https://t.co/4PNjOlmdmd@DanielaCambone #peterhug #gold #economy pic.twitter.com/PYUfFcDuJC

“[This] should keep macro asset allocators being net buyers of gold via futures and ETFs. Gold typically does well at the early stages of an inflation cycle, which does tend to come just after the peak rate of expansion. We do thus expect some increased micro asset allocation towards gold, though cognisant of the fact that retail investors, whether in developed or emerging markets, have many more potential investment options available to them than in past cycles,” analysts said.

Also, future U.S. dollar strength could prove to be a significant headwind for gold, limiting its potential recovery, the report added.