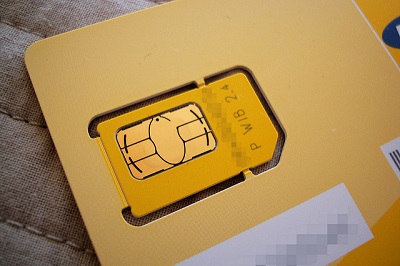 (Kitco News) - There is a significant recovery in gold demand happening within the technology sector, according to a study released by the World Gold Council (WGC), which notes that gold has a big role to play in the electrification of vehicles.

Gold’s technology demand accounted for more than 380 tonnes of the yellow metal used annually over the past decade, which is nearly 13% more than the central bank net purchases, the WGC said in its Gold And Technology research report.

“Gold’s role in this vibrant and growing industry is broadly unrecognized and often misunderstood,” the WGC CEO Aram Shishmanian wrote on Thursday.

Main uses of gold in the tech sector include phones, cars, TVs and hospital monitors. The yellow metal does not corrode and is known for its conductive qualities, especially when it comes to coatings for connectors and gold bonding wire, noted Metals Focus consultant Elvis Chou.

“[Gold] is a soft, pliable material, which can be easily drawn out into narrow wires or plated into thin coatings. These physical properties make gold the ideal material for a wide range of electronic applications,” Chou said.

The tech sector demand for gold tumbled in the first part of the decade, but is now seeing a substantial rebound, the study pointed out.

“Gold has an invaluable role to play in the industry,” said the WGC consultant Trevor Keel. “In 2017, the amount of gold used in technology rose by 3% to 332.8 tonnes, the first year-on-year increase since 2010. The last quarter was particularly strong, with demand rising to 88.2 tonnes, the highest for three years.” 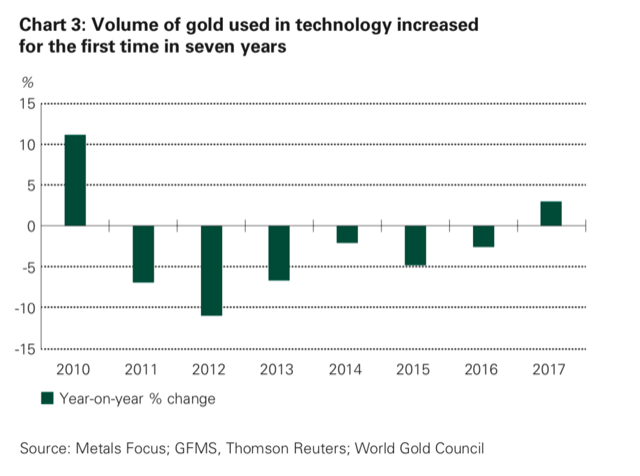 In the past, part of the problem was that the technology sector tried to find cheaper alternatives to gold, according to the WGC.

“Across the technology arena … gold remains a critical industrial metal. It is at the heart of new technologies being developed today to help society tackle some of the biggest challenges that we face both now and in the future,” Keel said.

One of the newest uses of gold comes from a human need for more memory in all their electronic devices.

“According to a recent survey from consultancy Counterpoint, for instance, the average memory installation per smartphone exceeded 50GB last year and is expected to reach 60GB by the end of this year. While advances in technology mean that wires are becoming thinner and fewer wire connections are needed, we still expect gold off-take to increase, as demand for data storage continues to grow,” the WGC study said.

Vehicle electrification is another growing field that is likely to boost demand for gold — a “preferred metal” for things like wire bonding.

The reason for that is because auto electrification has a number of safety requirements that are more important than the cost of the materials used.

On the healthcare front, gold is making headways as well, with news surrounding the use of gold nanoparticles when it comes to diagnostic testing, gene therapy, skin reconstruction, and antiviral drug production, the WGC said.

“The metal has been linked with health for millennia, but in recent years, a host of new diagnostic tools and treatments have been approved by regulatory authorities worldwide,” Keel noted.