'Too Much Of A Good Thing?' Gold's Low Volatility Could Be Here To Stay - Macquarie 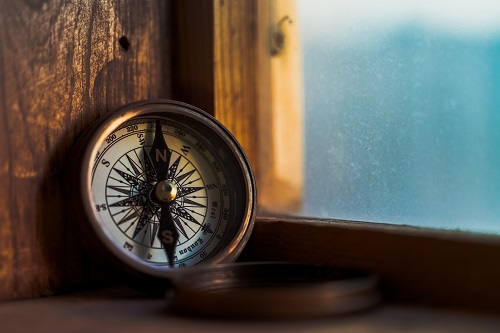 (Kitco News) - The gold market is going through some fundamental changes, with the precious metal becoming increasingly immune to rising geopolitical and macroeconomic volatility, according to Australian investment bank Macquarie.

Markets were exposed to some high-risk events in 2017 and 2018, but gold showed barely any reaction to major events such as, the U.S. President Trump’s first year in office, Brexit negotiation failures, North Korea tensions, turbulent elections in France and changes in Chinese political leadership, Macquarie precious metals analyst Matthew Turner wrote in a post published by the World Gold Council (WGC).

“[Gold] price volatility was at its lowest in more than 20 years,” Turner said. “To give a simple example: there wasn’t a single trading day during the year when gold ended more than 2.5% higher or lower than it had ended the previous day (the ‘day-on-day’ move). This was last seen in 1996.”

One of the explanation behind this low volatility in gold is market calmness, with investors interpreting the above events as not risky or not that exciting.

“President Trump made it through his first year largely unscathed, European politics caused fewer upsets than expected, and even when issues arose, they were largely overshadowed by the improving economy,” Turner explained.

There are two major changes happening in the gold market: “Shifts in the wider macro- economic and financial environment and shifts in gold’s internal fundamentals,” Macquarie pointed out.

“The first stems from the realization that many other asset prices, including equities, have experienced falling volatility. Indeed, over the past 90 years, 1964 is the only year that S&P volatility was this low,” Turner noted. “Various reasons have been put forward for this, many relating to central bank policy. Interest rates, inflation and growth have all been very stable.” 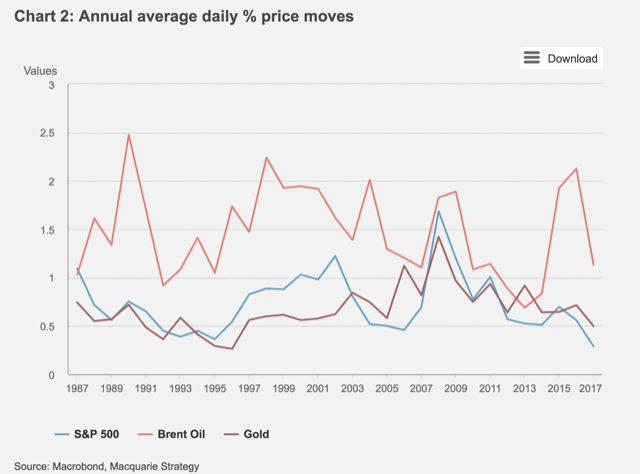 “The second explanation stems from the realization that not all assets have experienced falling volatility. Crude oil’s price volatility, for example, fell between the GFC and 2013, but it jumped significantly between 2014 and 2016, so much so that a longer-term trend is hard to discern,” he added.

Macquarie also examined the supply/demand side of things when analyzing lack of response from gold, highlighting that the demand side was the only one that has significantly changed and helped protect gold from price drops.

“Demand for gold is naturally quite elastic because it is not a necessity, unlike oil and many other commodities. But the growing importance of Asian jewellery demand has surely made it more so, cushioning gold’s investor-led sell-off in 2013 and helping to keep its narrow range since,” said Turner.

As things stand, the low price volatility in gold could be here to stay, the precious metals analyst added, noting that gold has been trading in a subdued manner all of this year.

“Indeed on some measures, such as the trading range, it has been less volatile than at any time since the early 1970s when it was fixed to the U.S. dollar,” he said. “For many investors, that will be exactly what they want from it. But you can have too much of a good thing.”