Gold Investors Still Have To Fight Against Surging U.S. Dollar

(Kitco News) - The gold market will remain at the mercy of the U.S. dollar, and some analysts warn that the metal’s downtrend in place since April is not expected to change anytime soon. 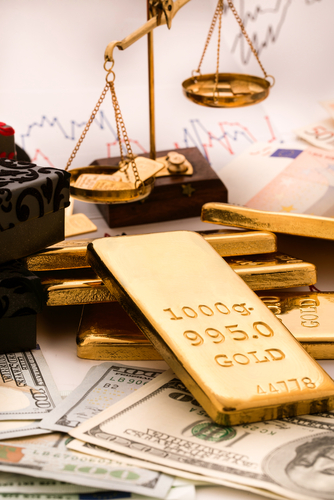 Gold is heading for another week in negative territory with its fourth drop in five weeks as prices have slumped to a new 12-month low. August gold futures last traded at $1,242.60 an ounce, down 1% from the previous week.

Gold's weakness comes as the U.S. Dollar Index continues to trade near a 12-month high, last trading at 94.85 points.

In what has been a frustrating week for gold investors, the yellow metal has ignored all positive fundamental data, including a rise in geopolitical tensions, inflation pressures and negative real interest rates.

“Gold remains completely imperturbable. Or to put it another way – no matter what happens, the gold price does not rise to any significant extent,” said commodity analysts at Commerzbank in a report Friday.

They later added: “Why gold is not profiting from the current turmoil is something that puzzles us more and more each day. We believe the gold price to be undervalued and expect a noticeable recovery in the second half of the year.”

A positive for gold should be the fact that real interest rates have dropped back into negative territory. In a report Thursday, the U.S. Labor Department said that its annual Consumer Price Index rose to 2.9%, its highest level in more than six years. Inflation is now above 10-year bond yields, which are currently trading at 2.83%. Investors who bought 10-year Treasuries are losing seven basis points on their investment because of rising inflation.

However, Lukman Otunuga, research analyst at FXTM, said investors can throw positive fundamentals out the window as the U.S. economy, rising interest rates and a rising U.S. dollar continue to dominate the market.

“Investors are more concerned with the value of the U.S. dollar than they are with gold,” he said. “It would take something extreme to push gold higher and we don’t see anything on the horizon.”

Otunuga added that markets and investors are numb and complacent to the growing threat of a global trade war. He explained that strong momentum in the U.S. economy has reduced the need for safe-haven assets.

“Even though there is a lot of uncertainty, it seems that the U.S. dollar continues to steal gold’s spot as the new safe haven,” he said. “Economic sentiment for the U.S. economy remains extremely bullish so investors are more inclined to buy U.S. dollar and equities than gold.”

Although the U.S. dollar index remains near a 12-month high, Neil Mellor, senior currency strategist at BNY Mellon, said that there is room for the greenback to move higher.

“The U.S. dollar index still has a ways to go before it hits the 2016 highs,” he said. “But instead of levels, it might be the pace of appreciation that we need to pay more attention to.”

While Mellor remains bullish on the U.S. dollar in the near term, he added that the Federal Reserve could be concerned that the currency is moving too high too fast and could make some comments to slow the rally.

“It is difficult to be bearish on the U.S. dollar right now.” he said.

Fed Chair In The Hot Seat Next Week

Fed Chair Jerome Powell’s semiannual testimony before Congress represents the biggest economic event next week and, according to one analyst, could be positive for gold.

Bart Melek, head of commodity strategy at TD Securities, said that he sees the potential for a retracement in the U.S. dollar as the Powell highlights growing risks in the U.S. economy.

“The Fed is going to have to acknowledge the growing risk from global trade tensions,” he said.

While the Federal Reserve sees two more rate hikes this year, Melek added that the central bank is still committed to a gradual rise in interest rates. He explained that this trajectory will continue to flatten the yield curve as short-term yields rise and long-term yields falls and will keep real interest rates lower. Both of these issues are bullish for gold.

Melek admitted that currently there is a breakdown in gold’s fundamental correlations, but this trend can’t last; at some point the market has to “revert back to the mean,” he said.

Mellor said that he doesn’t think Powell’s comments will add much momentum to the U.S. dollar, but he added that the dollar can still move higher without bullish comments.

“Powell is very bullish on the U.S. economy. The rhetoric is already pretty hawkish. I don’t know if he can add anything new,” Mellor said. “However, gold will continue to benefit from growing monetary policy divergence between the U.S. and Europe.”

Colin Cieszynski, chief market strategist at SIA Wealth Management, said one fundamental factor that investors need to keep an eye on is gold’s seasonal performance. Traditionally, the gold market weakens in the summer.

He added that the market still has a few more weeks in this slow period and that could mean lower prices in the near term.

“It’s possible that we retest the July 2017 lows at $1,205 an ounce,” he said. “I don’t think you can fight the technical picture, which points to a higher U.S. dollar and a lower gold price.”

While Powell’s testimony will be front and center, investors will see a pickup in the amount of economic data next week. The new trading week starts off with the release of retail sales data for June. Other key reports include regional manufacturing data from the New York Federal Reserve and the Philadelphia Federal Reserve, plus housing construction data.