(Kitco News) - Gold prices are closing in on a bottom, with a significant recovery coming in 2019, said ABN Amro in its monthly commodity update.

The metal was hurt by lack of risk aversion in the marketplace as world stock markets, including major U.S. stock indexes, hit multi-month highs last week.

“Higher US dollar, looming trade war between the US and China, downward adjustment in eurozone outlook and the slide in the Chinese yuan have contributed to price weakness,” ABN Amro senior precious metals and diamond analyst Georgette Boele wrote in the report on Friday.

“Weakness in precious metal prices is not over yet, but prices are close to the bottom,” she said. 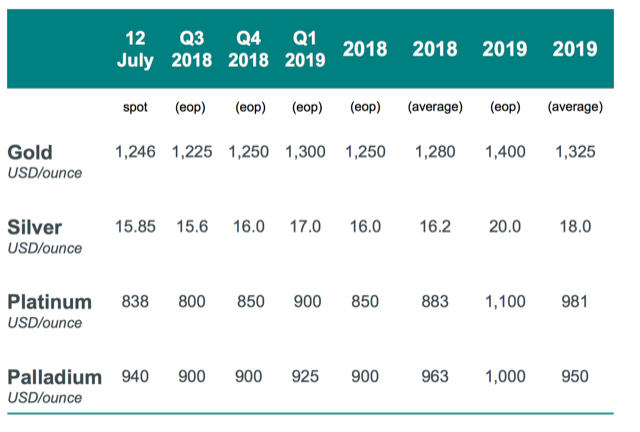 The main obstacles for gold this year will remain rallying U.S. dollar, additional Federal Reserve rate hikes, rising U.S. Treasury yields, as well as the escalating trade war tensions, which so far have not benefitted gold at all, according to the Dutch bank.

The good news is that investor patience will pay off next year, as gold prices have a chance to rally all the way up to $1,400, wrote Boele.

The precious metal will see a boost from an end to trade war rhetoric and a weakening U.S. dollar, which is projected to reach its highest level by the end of the year and then start dropping.

“Later in the year we expect U.S. dollar and 10y U.S. Treasury yields to peak, the fall in the yuan to come to an end and a significant escalation of a trade conflict to be averted. Therefore precious metal prices will probably recover,” Boele stated.

This week, all eyes are on Fed Chair Jerome Powell’s semiannual testimony before Congress on Tuesday.

Traders will be looking for clues about the state of the U.S. economy to see if there are any risks Powell is monitoring.

“The Fed is going to have to acknowledge the growing risk from global trade tensions,” Bart Melek, head of commodity strategy at TD Securities, told Kitco News on Friday.

Other things to watch this week include U.S. retail sales for June, regional manufacturing data from the New York Federal Reserve and the Philadelphia Federal Reserve, plus housing construction data.