(Kitco News) - Although gold prices have dropped dramatically in the last three months, one mining chief executive officer said that he sees some underlying strength in the marketplace as shares of gold miners have held relatively steady.

In a telephone interview with Kitco News, Rob McEwen, chairman and CEO of McEwen Mining (NYSE: MUX, TSX: MUX), said that while the gold price isn’t helping sentiment in the marketplace, he is encouraged by the price action in the VanEck Vectors Junior Gold Miners ETF (NYSE: GDXJ).

Since early April, gold futures have lost 8.5% in value; however, the junior mining ETF has lost around 1%. August gold futures are currently hovering around a 12-month low at $1,223.10 an ounce, while GDXJ last traded at $31.92 a share.

“Gold investors are frustrated with the market, but I think generalists are starting to see value in mining stocks,” McEwen said. “At some point, investors are going to start asking themselves where the earnings growth will come from and that will be from commodities. Now is the time to buy because there is real value in the market.”

McEwen said that it is unlikely the S&P 500 stock index will double in price from current levels. At the same time, it’s also unlikely that gold prices and the mining sector will see a significant decline from current prices, he added.

McEwen said that the industry-wide profitability is the one missing component that is keeping generalist investors from jumping into the precious-metals market en masse. He explained that many companies are not profitable and are sucking investment capital away from companies that make money.

“I think there needs to be some consolidation within the mining sector,” he said. “A company with one project is going to struggle to be profitable. Strategically grouping two or three projects together makes sense and will create a lot more value for investors.”

With that in mind, McEwen said that he is looking to put his company’s money to work. Currently, McEwen Mining is sitting on reserves of $30 million.

McEwen explained that because of current market conditions and extremely low valuations, his company is actively looking for projects to buy and expand its production pipeline.

As for other options, McEwen dismissed the idea of increasing the company’s dividend to attract investors. He said that a dividend would never be able to compete with rising interest rates.

“I think the best way to create value is to build out our production,” he said. “If I’m looking at buying projects, then investors should be doing the same thing.”

McEwen’s comments come after his company saw a nearly 66% increase in gold production in the second quarter, compared to the same period last year.

McEwen said that the increase in gold production was because of its Canadian Black Fox Mine, which was purchased last year. 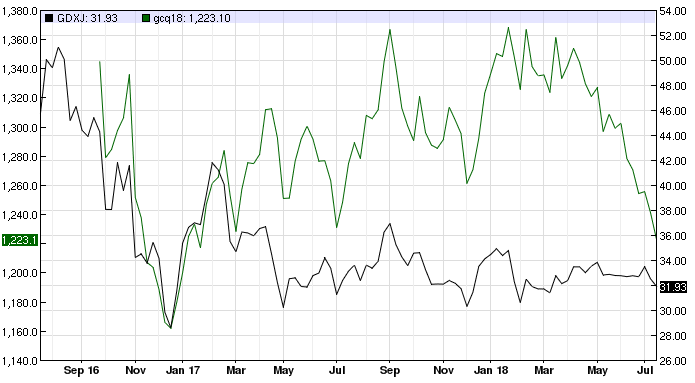