(Kitco News) - A priceless treasury trove that dates back nearly 800 years before Christ has been uncovered by archaeologists in the remote Tarbagatai Mountains in Northeastern Kazakhstan.

According to media reports, archeologists found 3,000 gold and precious metals objects and jewelry pieces that are believed to belong to a noble family of the Saka people who ruled throughout central Asia 2,800 years ago.

“'A large number of valuable finds in this burial mound let us believe a man and a woman are buried here - the reigning persons or people who belonged to the elite of Saka society,” said Professor Zainolla Samashev, who is in charge of the project.

The burial items include bell-shaped earrings, gold plates, chains and necklaces with precious stones. According to the researchers the jewelry was made using sophisticated techniques, indicating a high level of metal working skills for the period.

Danial Akhmetov, Governor of the East-Kazakhstan region, and former prime minister, said in news interviews that the discovery, “gives us a completely different view of the history of our people.’

“We are the heirs of the great people and great technologies,” he said.

Archaeologists continue to excavate the region and say that this could be just the start of more “priceless” discoveries. According to the research, there are around 200 burial mounds on the Eleke Sazy plateau where these treasures were found, but many sites were uncovered and items removed during the rule of Russia’s Peter the Great.

The Saka people were a branch of the Sythians - a sophisticated nomadic civilization in central Asia stretching into Siberia. 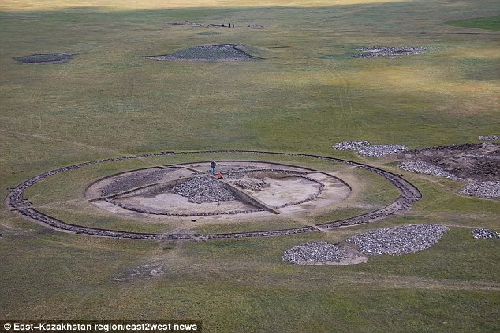