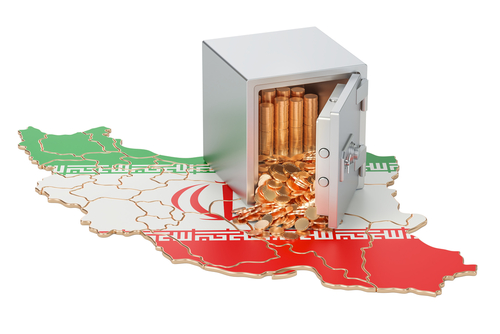 (Kitco News) - A gold rush is setting upon Iran as citizens attempt to convert their savings into gold amid fears of a currency collapse and rising living costs following new U.S. sanctions.

The first round of sanctions against Iran kicked off on Tuesday, with the second round expected in November.

The sanctions focus on Iran’s metals trading, including gold, as well as the country’s automotive sector. They also attempt to limit dealings in Iran’s currency. The November round is said to be even harsher, with the U.S. pushing for as many countries as possible to cut their oil imports from Iran.

All of this additional geopolitical tensions could be very good news for gold prices, which have recently taken a beating and are trading just above last week’s fresh 12-month lows. December Comex gold futures were last seen at $1,218.30, up 0.05% on the day.

“Likely rising tensions between the U.S. and Iran could be the next geopolitical flashpoint in the world marketplace, which could boost safe-haven gold and silver prices,” said Kitco’s senior technical analyst Jim Wyckoff. “Reports said Iranians are purchasing and hoarding gold on fears of a collapse in the Iranian economy. 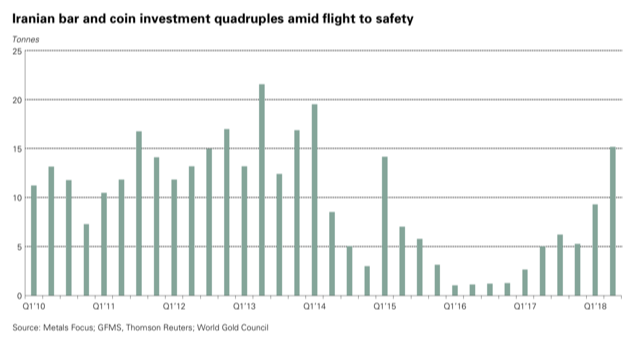 Iranian reaction to the sanctions has been a run on gold, according to the World Gold Council (WGC).

The country’s demand for bars and coins jumped 200% on an annual basis, reaching 15.2 metric tons — the highest level in more than four years.

“Coin demand was healthy as the Iranian central bank increased the amount of gold coins released to the market. Gold coins have performed well in recent quarters as, unlike gold jewellery, they do not attract 9% VAT,” the WGC added.

As the threat of U.S. sanctions drew closer, Iran’s rial currency plummeted, losing around half its value since April. In the meantime, inflation also surged, hitting double digits, and unemployment rate climbed to 12.5%.

Gold is a traditional inflation hedge that offers protection against economic risks at times of crisis, which is why Iranians are flocking to the yellow metal now.

“People are changing their money into gold because it’s a reliable investment commodity,” Mohammad Kashtiaray, the head of gold and jewelry committee under Iran’s Chamber of Guilds, a coalition of merchants, told The Wall Street Journal.

According to media reports, Iranians are lining up in front of banks to place advance orders on Emami gold coins, which are minted by the country’s central bank and are usually priced lower than other gold coins.

But, prices, even for the Emami coins, have doubled since January, now selling for around 36 million rials (USD$855), the WSJ added.

American sanctions come after the U.S. President Donald Trump’s decision in May to pull out of the nuclear deal sealed with Iran during the Barack Obama’s presidency.