(Kitco News) - After briefly breaching the $1,200-an-ounce level, gold prices have only higher to go, with the third quarter marking the bottom for prices in 2018 and 2019, according to ABN Amro.

“Gold, silver and platinum prices are expected to bottom out during the coming weeks. We expect higher prices in 2019,” the Dutch bank’s senior precious metals and diamond analyst, Georgette Boele, wrote in a report on Tuesday.

One of the factors pointing to prices finally reaching their bottom levels in the current quarter is the net-short position of speculators in the precious metals.

“Speculative positions in gold, silver and platinum are at all-time highs and net positioning is close to zero (gold and silver) or negative (platinum),” Boele said. “We think that investors who are negative on precious metals are already short and that there is not much room to increase shorts from here. We expect prices to start bottoming out at current levels.”

On Monday, gold prices tumbled down to fresh 1.5-year lows as the Turkish currency crisis continued to grip markets’ attention, with December Comex gold futures touching the $1,199.10-an-ounce level. Since then, the yellow metal saw a corrective bounce, helping the December futures come back to trading at $1,204.40, up 0.46% on the day.

“The currency markets have stabilized a bit today, following Monday’s and recent price action that have seen the world’s secondary currencies seriously depreciate against the U.S. dollar—especially the Turkish lira,” Kitco senior technical analyst Jim Wyckoff said. “Gold and silver traders have been frustrated their safe-haven metals have not benefitted from this situation—at least not yet.”

But, it is not all about the U.S. dollar, added Boele, noting that the pessimism surrounding gold prices has also to do with lower Chinese yuan.

“Gold prices have dropped below USD 1,200 per ounce because a lower Chinese yuan has resulted in fears of lower demand,” she said. “The Chinese yuan is now the most important driver for gold prices followed by the U.S. dollar. We expect that Chinese authorities will try to avoid a further sharp weakening of the yuan from current levels.” 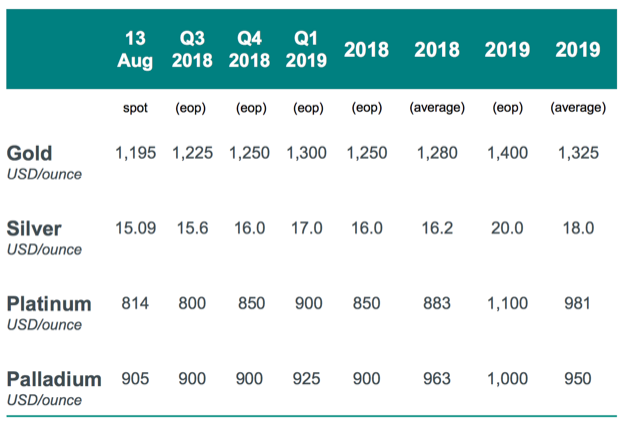 Despite the current bearish trend, Boele is hopeful about next year, projecting for gold prices to average $1,325 an ounce in 2019 and end the year at $1,400 an ounce.

When it comes to base metals, ABN Amro is also optimistic. “Tighter markets in most base metals markets in Q4 and continued global economic growth should support base metal prices,” the bank said.

One of the main drivers for base metals will remain the trade spat between the U.S. and China due to fears of lower demand.

“As soon as fundamental indicators take over again and trade tensions ease, a positive price trend will probably re-emerge,” wrote ABN senior sector economist Casper Burgering. “From a fundamental perspective - with tighter markets in most base metals in Q4 and continued global economic growth - base metal prices (especially aluminum, copper and nickel) are expected to appreciate during Q4 again.”