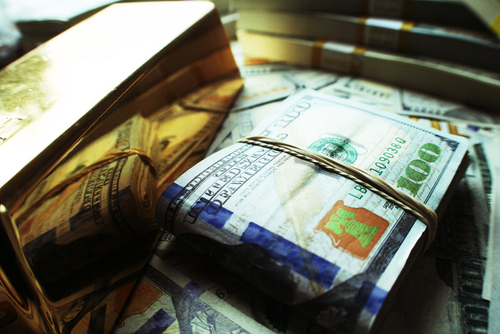 (Kitco News) - Gold prices will return to their former glory when the dollar takes a step back, according to Capital Economics, which expects the precious metal to rally only next year when U.S. economic growth makes a U-turn for the worse.

“Although gold is perceived to be a safe-haven asset, it hasn’t behaved much like one over the past week,” Capital Economics commodities economist Simona Gambarini said in a note published on Tuesday.

This is visible not just from the gold’s steep drop below $1,200 an ounce on Monday, but also in its comparison to the Japanese yen, which has rallied during the Turkish currency crisis despite the higher U.S. dollar, Gambarini pointed out.

What’s interesting here is that gold and the U.S. dollar has become viewed as substitutes by some forces in the marketplace, the note explained, highlighting the strong correlation between the higher greenback and lower gold prices.

“A key explanation for the weakness of gold since the spring has been the broad-based strength of the dollar. There tends to be an inverse relationship between commodities prices and the value of the U.S. currency. But in the case of gold, this inverse relationship is even stronger as gold and the dollar can at times be considered substitutes,” Gambarini wrote. 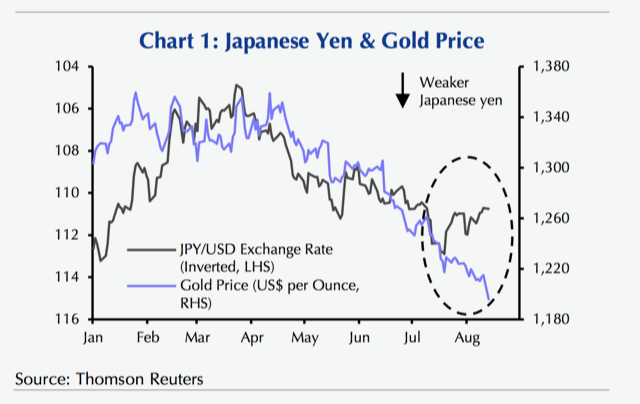 This phenomenon is not new and can easily be tracked throughout the last two decades. At times of dollar-positive stress, gold loses its safe-haven appeal to the greenback, Capital Economics stated.

“For example, the price of gold fell by roughly 30% during the global financial crisis when the dollar strengthened. The price of gold only started rallying towards the end of 2008. This was after the Fed cut interest rates and embarked on quantitative easing, which caused the dollar to depreciate sharply,” Gambarini described.

Whenever the U.S. economy appears to be safer than others due to a global crisis of some sort, the immediate safe-haven beneficiaries are the U.S. Treasuries and the greenback, the economist concluded.

Based on this logic, Capital Economics does not see gold prices recovering until mid-2019, projecting the year-end level to be not higher than $1,200 an ounce.

“Given our view that the dollar will remain strong into 2019, we don’t expect the price of gold to recover much ground before then,” Gambarini said.

But, long-gold bulls should not give up hope, as things will look very different next year, according to the economic research firm.

Gambarini expects a reversal of U.S. economic growth in 2019, projecting bleak times ahead.

“Next year … gold will regain some of its lustre. This is because we anticipate that the dollar will falter, as the Fed calls time on its rate hikes around the middle of the year in response to signs of a sharp slowdown in the U.S. economy. Our end-2019 forecast is $1,350 per ounce,” she said.

As things progress, the economic situation in the U.S. might get even worse, with a probability of a recession building on the horizon.

Capital Economics warned investors earlier this summer of a looming slowdown, estimating a 1.3% GDP growth in 2020 and a reversal of Federal Reserve’s tightening cycle.

“Fueled by the fiscal stimulus, we expect GDP growth to be 2.9% this year but, as the stimulus fades and higher interest rates become a bigger drag on the economy, growth should slow to 2.0% in 2019 and only 1.3% in 2020. In that scenario, we expect the fed funds rate to peak at just below 3% in mid-2019, with the Fed being forced to cut interest rates again in 2020,” Capital Economics said in its U.S. Economic Outlook report published in June.