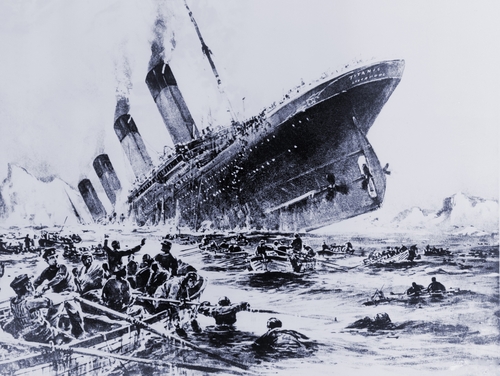 (Kitco News) - A gold cigarette case with a connection to the Titanic is grabbing the attention of all types of antique collectors curious about its scandalous history as the artifact heads for an auction in September.

The original owners of the cigarette case were Sir Cosmo and fashion designer Lady Duff-Gordon — the very wealthy married couple that is said to have bribed their way off the sinking Titanic by paying a very lofty sum.

“In the aftermath of the tragedy, the couple was accused of buying their way off the boat, a story inflamed by the tabloid press. But at a British Board of Trade inquiry into the disaster, where the couple testified, Sir Cosmo was adamant he’d given the money as a gesture of goodwill to help the men. However, mud sticks and they were tainted by the incident for the rest of their lives,” The London Economic quoted Hansons Auctioneers’ owner Charles Hanson as saying.

The RMS Titanic collided with an iceberg at 11:40 p.m. ship’s time on April 14, 1912, sinking just a couple of hours later in the early hours of April 15, with more than 1,500 people still aboard. Just over 700 people managed to survive this tragic maritime disaster.

The gold cigarette case was gifted by Duff-Gordons to Ernest G. F. Brown, a purser on board the RMS Carpathia — a ship that arrived just under two hours after the Titanic sank to bring aboard the survivors.

The case has an inscription: ‘Ernest G F Brown RNR, in remembrance of kindness. SS Carpathia, from Sir Cosmo and Lady Duff-Gordon’. Brown was also awarded a gold medal for his pivotal role in the Titanic rescue operation.

“It really is a titanic find, a glint of light and romanticism among a tragedy,” Hanson said. “This couple was the glitterati of Edwardian society and it was gifted as a thank you to the man who helped save them.”

The cigarette case was unexpectedly discovered in a cupboard at a property in southern England after being forgotten about for 70 years.

“It was found hidden in a cupboard during a house clearance and the couple had no idea of its significance,” Hanson said. “This cigarette case in its own right is a wonderful object but its provenance sends its importance soaring to titanic heights.”

Duff-Gordons were able to grab Titanic’s Lifeboat Number 1, which was lowered down into the water with just 12 people on it, despite having the capacity to carry 40, which led British press to dub the boat ‘millionaires’ boat.’

“As the Titanic sank, it was claimed Lucy Duff-Gordon said to her secretary, ‘There is your beautiful nightdress gone’,” Hanson said. “A fireman, allegedly annoyed by her comment, replied that while the couple could replace their property, he and the other crew members had lost everything. Sir Cosmo then offered each of the men £5 (now equaling to £454 [$579]) to aid them.”