Gold Bears Not Letting Up; No Low In Sight As Prices Remain Below $1,200

(Kitco News) - Bearish speculative investors continue to hold the gold market in a death grip and are in complete control of the price action, according to the latest trade data from the Commodity Futures Trading Commission (CFTC). 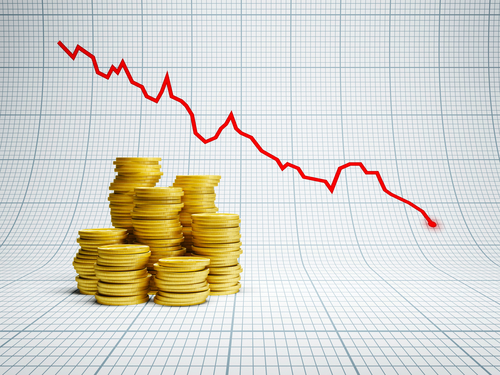 While analysts continue to wait for the ever-elusive short squeeze to breathe new life in the yellow metal, the market’s speculative short side continues to expand hitting new historical record on a weekly basis. Net speculative short positions have increased for seven consecutive weeks.

“Speculative financial investors remain the primary factor weighing on the gold price. In the last reporting week alone, they sold 53.5 tons of gold via the futures market,” said analysts from Commerzbank. “Selling since the end of June now totals almost 260 tons – equivalent to nearly a month’s worth of global gold mining production.”

The CFTC's disaggregated Commitments of Traders report, for the week ending Aug. 14, showed money managers decreased their speculative gross long positions in Comex gold futures by 1,046 contracts to 104,803. At the same time, short bets rose by 16,162 contracts to 188,127.

Gold’s net-short positioning currently stands at 83,324contracts, a 26% increase from the previous week. During the survey period, gold prices continued to test critical support at $1,200 an ounce.

Analysts are not expecting to see a significant reversal in gold’s fortunes anytime soon as prices have fallen below critical support, hitting a low not seen since early 2017.

“It’s a sucker’s bet to try to call a bottom in this market right now,” said Ole Hansen, head of commodity strategy at Saxo Bank. “The bears are in complete control of this market.”

Hansen added that gold would have to reclaim at least the $1,200 level to bring even a low level of optimism back to the marketplace.

Commodity analysts at TD Securities noted that gold’s net length is at its highest level since 2001 and they don’t see an end to the current trend in the near term.

“Precious metals will likely remain under pressure in near term, requiring some stability across [emerging markets] and easing dollar strength before making a material recovery,” the analysts said.

While Hansen sees the risk of lower prices in the near term, he added that he continues to think that gold’s short trade is extremely crowded and a short squeeze is a definite risk in the marketplace.

Hansen added the annual global central bank gathering at Jackson Hole, Wyoming could at least relieve some of the selling pressure, if not trigger the start to a short squeeze this week.

“[Fed Chair Jerome Powell] is not going to be more aggressive on monetary policy than he has already been,” he said. “If he blinks on monetary policy, that could send the U.S. dollar lower and drive gold prices up.”

As to how to play this overcrowded gold market, Hansen said that he still prefers to invest in the yellow metal through the options market. He added that he still likes December $1,250 call options.

The disaggregated report showed money-managed speculative gross long positions in Comex silver futures fell by 930 contracts to 66,537. At the same time, short positions rose by 7,383 contracts to 88,828. Silver’s net-short positioning increased to 22,291, up more than 59% from the previous week.

Like gold, analysts are not expecting to see bearish investors release their grip on the silver market anytime soon. Last week, silver prices fell to their lowest level since early 2016.