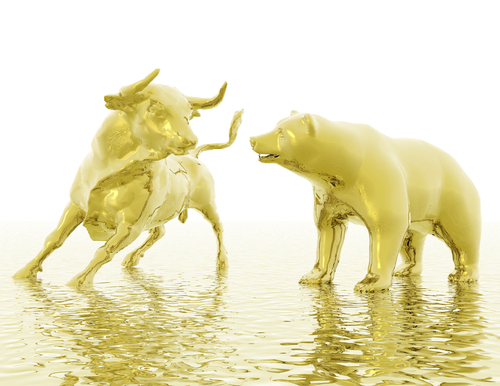 (Kitco News) - “A considerable boost” to the precious metals is coming later this year as the U.S. dollar rally tops out and a record number of bearish gold positions unwind, according to TD Securities.

Once the U.S. dollar strength is out of the way, the focus will shift back to how flat the U.S. yield curve is, TD’s commodity strategists said in a note published on Monday.

“We are still expecting precious metals to rebound later this year and into 2019,” Bart Melek, Ryan McKay, and Daniel Ghali wrote. “As dollar strength lets up, focus will return to the flatness of the yield curve and speculators will have record amounts of bearish positions to unwind, providing a considerable boost to precious metal prices.”

A big turnaround in gold prices will also be supported by the Fed wrapping up its tightening cycle next year, TD Securities added.

“The fears of contagion from Turkey are likely overblown, while the Fed hiking cycle will be nearing an end into 2019, just as other central banks begin unwinding accommodative policy, which should all be bearish for the US dollar longer term,” the strategists explained.

But, in the near term, investors should expect greenback-related pressures continuing to weigh on gold, while not taking prices too much lower, the note added.

Driving the latest momentum in the U.S. dollar rally is the economic uncertainty in Turkey, which is spreading weakness through emerging market currencies as well as European currencies while benefitting the greenback.

“On the precious metals side, the renewed dollar strength was enough to see speculators continue piling on bearish bets, with record gold, silver and platinum short positioning growing week by week, while all three metals are net short at the same time for the first time since 2001,” the strategists stated.

Gold, usually considered a safe-haven investment at times of crisis, has been lacking in luster this summer, with TD Securities blaming the currency wars for this new trend.

“Gold typically has a robust negative correlation with the slope of the US yield curve and performs as a safe haven during times of turmoil, but these relationships have broken down recently with currency dynamics overwhelming those relationships,” the strategists said.