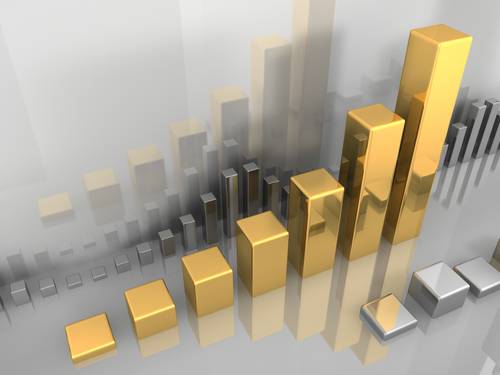 (Kitco News) - There won’t be enough consumer demand to drive gold prices higher this year, according to Capital Economics, which projects gold to end the year at the $1,200 an ounce level.

“We doubt that consumer demand for gold from India and China will provide much support to prices in the coming months. Our end-2018 forecast for the price of gold is $1,200 per ounce, broadly unchanged from today’s level of $1,209,” Capital Economics commodities economist Simona Gambarini said in a note published on Tuesday.

Gold saw a positive momentum forming at the end of last week, which managed to carry though untill Tuesday afternoon, but then prices dropped once again to slightly above the $1,200 an ounce level.

“Some normal profit-taking from the shorter-term futures traders was featured today, following decent gains the past few sessions that do suggest the yellow metal has put in a near-term market bottom,” Wyckoff said in his PM Roundup.

But, Capital Economics remains conservative in their near-term outlook, pointing to gold not going anywhere until next year.

“Looking ahead, we expect consumer demand from both [India and China] to decline, which is one reason why we forecast that gold prices will remain low,” Gambarini said.

The note added that while China’s gold imports declined in July, India showed renewed interest, but the recovery fell short of erasing all of the previous damage. 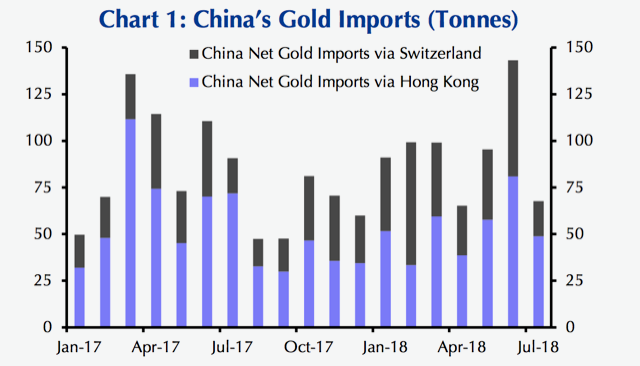 “Data released from the Hong Kong Census and Statistics Department, yesterday, and by the Swiss Federal Customs Administration, last week, revealed that China’s combined imports of gold via the two hubs slumped by 53% m/m and 25% y/y in July to 68 tonnes,” Gambarini said.

Capital Economics raised concerns over lack of consumer confidence in the state of the economy as one of the reasons for lower demand. “Given that we expect the Chinese economy to continue to slow over the coming quarters, jewelry sales could fall further,” Gambarini wrote.

In India, things are slightly looking up, with the country’s Commerce Ministry reporting that India’s imports of gold were up by 29% on a monthly basis and up by 41% on an annual basis in June, reaching $2.96 billion. 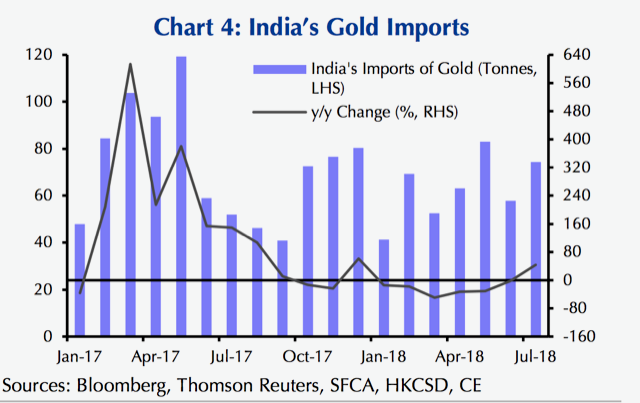 But, these numbers are not enough to bring consumer demand back to where it was a few years prior, Gambarini pointed out, citing India’s new regulations and weather factors as the main elements weighing on gold demand.

“The bigger picture is that imports are still down by over 20% y/y since the start of 2018 and we think that increased regulation and a below-average monsoon will weigh on India’s gold demand in the remainder of the year, even in the face of strong economic growth,” she added.