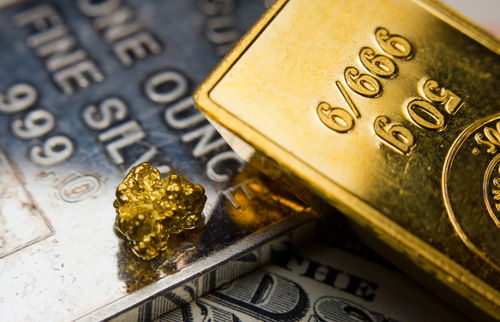 (Kitco News) - With U.S. wage growth back in the game, the Federal Reserve could be on “auto-pilot” to raise rates, according to analysts, who worry what this might mean for gold.

August’s employment data, which sent gold to daily lows of just below the $1,200 an ounce level on Friday, is likely to play a big role in gold’s price direction next week. December Comex gold futures last traded at $1,200.40 an ounce, down 0.52% from the previous weekly close.

“Gold is most likely to migrate somewhat lower next week and test recent lows,” TD Securities head of global strategy Bart Melek told Kitco News on Friday. “Wouldn’t be surprised by a move down to $1,183 in the near-term.”

Gold prices reversed recent gains following the U.S. jobs report from August, which showed that an additional 201,000 positions were created, while the unemployment rate remained unchanged at 3.9%.

But, the key feature of the report was the average hourly wages, which rose 0.4% in August and bumped the annual increase in wages to 2.9% — the strongest growth in nine years.

“Real wage growth has traditionally been a catalyst for inflationary pressures. This enshrines Fed’s ‘steady as she goes’ gradual increases,” said Melek. “We don’t think it is a death to the gold market just yet. But, it is difficult to see gold rally in a significant way while the Fed is not backing off.”

"This definitely points towards another rate hike at the next Fed meeting and the central bank is likely to hike 25 basis points every quarter,” Ashworth said. “Fed’s estimating about two rate hikes for the second half of the year.”

Fed officials also seem to be on board with this direction, added Ashworth, noting that Fed Chair Jerome Powell’s speech at Jackson Hole reiterated what the previous FOMC meeting minutes already stated.

What Could Go Wrong For Fed?

While everything seems all set for another rate hike later in September, there are still several key factors that could derail Fed’s plans, according to the analysts.

“It would have to be something dramatic on the trade front,” said Ashworth. “[For example,] the U.S. President Donald Trump deciding to trigger a six-month withdrawal from NAFTA next week if the deal with Canada fails.”

That combined with a threat of additional $200 billion worth of tariffs on China’s imports could mess with Fed’s plans, added Ashworth.

But, at the moment, the U.S. economy is growing rapidly, he said, warning that by mid-next year, the effects of fiscal stimulus could wear off, slowing economic growth and forcing the Fed to end its tightening cycle.

“After today’s wage growth, the Fed is on auto pilot to raise rates and therefore gold is still suffering a minor setback,” Gero told Kitco News.

Gero is expecting a steady market next week. “Looking for minor ups and downs but probably we’ve got a lot of the negative prices in already,” he said. “Steady bargain hunters market next week.”

SIA Wealth Management chief market strategist Colin Cieszynski said while he was bullish on prices, he was not expecting a big rally.

“Gold continues to carve out a base trading near $1,200 and it looks like the worst has passed technically for now. Seasonally, we are moving into the most favorable time of the year for gold which runs through January,” he told Kitco News.

One of the biggest downward drivers for gold this summer has been the U.S. dollar, Cieszynski explained, noting that the greenback could take a step back after the Fed’s rate announcement in September.

“The fed is going to meet later this month and they will raise interest rates and then go quiet for a few months,” he said. “For the U.S. something that would derail it would be related to the economy. The U.S. dollar will level off and take pressure off gold … Plus, with Congress starting to push back on trade with Canada as well, it looks to me like the U.S. Dollar may be due for a pause.”

Analysts at Blue Line Futures said they were neutral on gold at the moment, while maintaining an optimistic outlook.

“We still find gold undervalued at $1,200, the data is making its case but that does not mean there is a case for gold to sustain itself below $1,200,” analysts said in a note to clients. “Gold is holding ground very well at $1,200 this morning considering the fundamental news. This is a great sign and signals that gold has already incurred the worst of the selling.”

Data To Keep An Eye On

There is a slate of important data scheduled for next week, including U.S. retail report, CPI, and PPI numbers.

“At this stage in terms of data it would have to be pretty dramatic, we’ve got the retail sales and CPI and industrial production. We expect retail to be strong and a bit more of an increase in core consumer prices. We don’t expect any big surprises,” said Ashworth.

Other items on the agenda are the Atlanta Federal Reserve Bank President Raphael Bostic’s speeches on Monday and Thursday.

On top of that, the Bank of England (BoE) and the European Central Bank (ECB) are scheduled to make their rate announcements on Thursday.