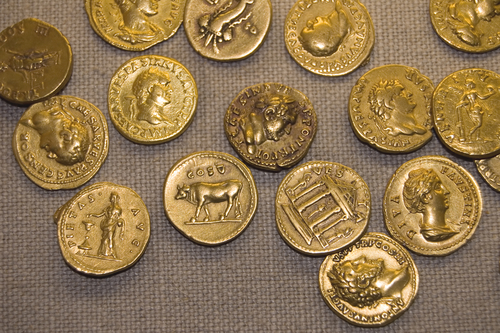 (Kitco News) - A jar full of ancient Roman gold coins reportedly worth millions was dug up in a former theatre in northern Italy.

The unique coins that date back to the fifth century AD — late Roman imperial era — were found in what archeologists are referring to as a soapstone jar, according to the Italian Ministry of Culture.

The treasure was discovered in the basement of the Cressoni Theatre in Como, which is located north of Milan.

“We do not yet know in detail the historical and cultural significance of this discovery but this area is a real treasure for our archeology,” Minister of Culture Alberto Bonisoli said in a press release published on Friday.

Italian media, in the meantime, have been reporting that the coins could be worth millions of euros.

The coins were transferred to a restoration lab in Milan for further study. Local authorities have scheduled a press conference for Monday to talk about the discovery and present the results from the first 27 coins that were extracted and analyzed.

The site of the theatre, which was officially closed since 1997, was due to be demolished to make room for modern luxury residence in Como. These plans are now likely to be put on hold until further excavation is carried out, local media reported.

Archeologists believe that the site could also contain jewelry and gold ingots.

Italian Ministry of Culture also revealed that the excavation site is close to the Novum Comum forum — an area known for some major Roman artifacts discoveries.