Gold To Be Stuck Around $1,200 For Another Week – Analysts

(Kitco News) - Investors who are waiting for a breakout move in gold might want to take a break next week and watch paint dry instead since that might be more exciting, according to some commodity analysts.

Gold has been stuck around the $1,200-an-ounce level for the last four weeks and since the next Federal Reserve monetary policy meeting is still one and one-half weeks away, analysts are not expecting to see any significant move in the near term.

“Right now the market is telling investors that they need to be patient,” said Ole Hansen, head of commodity strategy at Saxo Bank. “I think we will have to wait until after the next Fed meeting before we see any new direction in gold.”

Of course, if investors want a little bit more excitement, they can always watch the silver market, which has drastically underperformed gold. This week silver prices briefly fell to a fresh 1.5-year low this past week, which pushed the gold-silver ratio to its highest level in 25 years.

While silver is off its recent lows, the market continues to struggle to find momentum. December silver futures last traded at $14.13, relatively unchanged from the previous week. 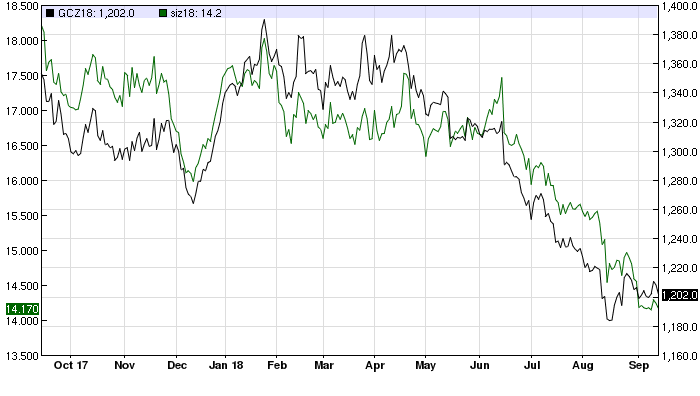 Analysts have noted that not only is silver suffering from lackluster interest in the precious-metals market but weak copper demand is also weighing on the grey metal, which has significant industrial demand.

Hansen said that while silver looks attractive as an undervalued asset, investors need to wait for interest to return to the precious-metals marketplace.

“If the investor story returns to markets, then silver is a lot more attractive than gold, but until that happens, I would stay away from the metal,” he said.

Nothing Will Sway Fed From September Rate Hike

According to analysts, an impending interest rate hike Sept. 26 will keep a lid on any significant gold rally in the near term. Markets are all but guaranteeing an interest-rate hike, according to data from the CME’s Fedwatch tool.

Expectations haven’t changed even after disappointing inflation and retail sales data released this past week. David Madden, market analyst at CMC Markets, said that although recent economic data was disappointing, it shows that the U.S. economy remains healthy.

“The U.S. economy is not booming, but it’s not collapsing either. Growth looks pretty good,” he said. “The U.S. growth is still beating other economies and that will continue to make the U.S. dollar attractive and gold uninteresting.”

Maddening added that with the U.S. economy still growing, the Federal Reserve will continue to raise interest rates, starting with at least two more rate hikes this year.

He added that ahead of the September rate hike, he would expect gold to struggle to attract any investor attention.

“Few traders will want to be long gold ahead of the Fed meeting,” he said. “With that being the case, if we do see a move in gold, I would expect it would be to the downside.”

With markets expecting a continued rise in interest rates, bond yields are starting to move higher, testing critical resistance levels. In particular, the U.S. 10-year bond yield is trading around 3%, its highest level in a more than a month.

Christopher Vecchio, senior currency strategist at DailyFX.com, said there is technical potential for bond yields to continue to move higher, which does not paint a positive picture for gold.

“Gold right now is very neutral,” he said. “However the U.S. dollar meandering sideways and higher bond yields do not bode well for the precious metal.”

Not only do higher interest rates raise gold’s opportunity costs but Madden noted that they also compete with the metal’s safe-haven appeal.

Madden said that if geopolitical uncertainty starts to rise in the near term, investors are probably more likely to invest in the U.S. dollar and Treasuries than gold.

There Is Still Some Optimism In Gold

Although there is a lot of doom and gloom sentiment in the gold market, some fund managers are starting to see value in the precious metal.

In a rare investment idea, Lisa Shalett, head of wealth management resources at Morgan Stanley Wealth Management, recommended investors sell some of their equity positions to build a 3% to 5% position in gold.

While she doesn’t see long-term potential for the yellow metal, she said that she sees potential as a tactical asset.

“Our analysis suggests that current market positioning is not sufficiently discounting an interruption of the current trend in which growth is strong and the Fed is perceived as dovish, nearing the end of its hiking cycle. Although these conditions may persist, gold may benefit from any reappraisal of the outlook.”

While gold continues to build a base around $1,200 an ounce, analysts say that the first resistance level to watch is around $1,215. However, Hansen said that gold bears would only start to feel uncomfortable when prices are back above $1,230 an ounce.

Vecchio said that he needs to see prices push above $1,230 an ounce to negate the April downtrend.

Next week is relatively light on economic data, but markets will receive significant U.S. housing construction and sales data and some regional and preliminary manufacturing sentiment data.