(Kitco News) - Ongoing questions over the U.S. dollar's role as the world's reserve currency is creating new interest in gold as a reserve asset, according to the latest market update from the World Gold Council.

In a report published Thursday, the WGC said that central bank gold demand has increased 8% in the first six months of the year, totaling 193.3 tonnes of gold, the sharpest increase in the first half of the year since 2015. 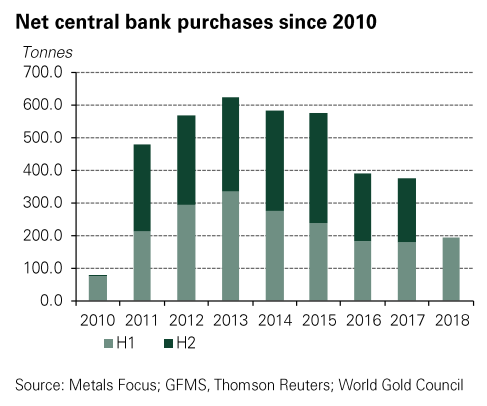 "Looking ahead, we expect central bank demand to remain buoyant. Diversification will continue to be an important driver of demand, as will the transition to a multipolar currency reserves system over the coming years," the analysts said in the report.

So far Russia has been the standout in the gold market as the nation's central bank has bought 131.3 tonnes of gold so far this year. Rounding out the top three are Turkey and Kazakhstan.

However, in recent years the WGC has noted that other emerging market central bank including Egypt, India, Indonesia, Thailand, Philippines, Mongolia and Iraq have bought gold this year.

The analysts noted that central banks are turning to the yellow metal in an attempt to diversify their assets in a world with few attractive options.

"Against the backdrop of persistent low and negative bond yields and limited high-quality investment options, it makes sense for central banks to turn to gold as a means to increase portfolio diversification," the analysts said.

However, it's not just currency diversification central banks are hoping to protect against. Last month's emerging market currency crisis, sparked by economic uncertainty in Turkey has some central banks looking at gold's safe-haven allure, according to the World Gold Council.

"In an environment of heightened geopolitical tensions, gold is an attractive asset because it is not anyone else's liability and does not carry any counterparty risk," the analysts said. "Gold is already a familiar asset class for central banks, but the changing nature of the gold market – with ever-growing consumption coming from developing economies – means that gold is increasingly aligned with emerging market economic patterns. Central banks may increasingly recognize that the rules of the game are changing."

Looking specifically at Turkey, there are reports that the country’s central bank liquidated gold to support the crashing lira; however, the WGC said it thinks the drop last month was more the result of a function of the market than central bank selling.

“It is likely the decline in the amount of gold included in the ROM in recent months reflects unwinding swap activity rather than outright gold sales, although some will relate to profit taking by retail investors taking advantage of record high gold prices in August.