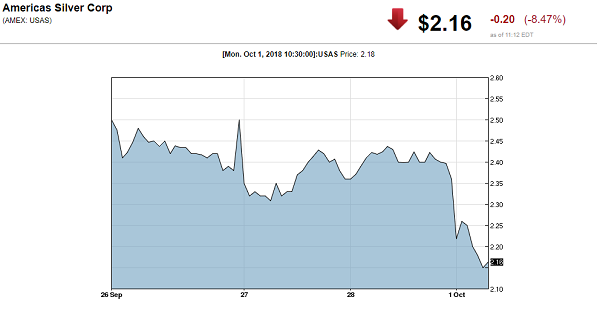 (Kitco News) - The mining sector continues to build momentum as another merger deal has been announced.

According to the press release, Pershing shareholders will receive 0.715 common shares of Americas Silver for each common share of Pershing.

“Based on the closing price of Americas Silver on the NYSE American on September 28, 2018, this implies a value of US$1.69 per Pershing common share,” the press release said. “This represents a 39% premium to Pershing’s closing price on the NASDAQ and a 39% premium based on the volume weighted average prices of Americas Silver and Pershing for the 10-day period ending on September 28, 2018.”

Shares of Pershing have surged more than 10% on the day following the announcement. Meanwhile, shares of Americas Silver are down almost 10% on the day.

The press release said that the board of directors of both companies have unanimously recommended support for the transaction.

“This transaction aligns with our stated initiative of building a profitable and low-cost precious metal company in the Americas by operating and building low risk, low capital, high return projects,” said Darren Blasutti, president and chief executive officer of Americas Silver, in a statement.

“We are excited to announce today’s transaction and believe this provides a clear path to the development of Relief Canyon,” added Steve Alfers, president and chief executive officer of Pershing.

While Americas Silver has multiple producing assets in Mexico, a benefit of the merger is giving the company a foothold in North America with Pershing’s property in Nevada.

Currently, America Silver is looking to produce between 1.6 million and 2 million ounces of silver this year and between 7.2 and 8 million silver equivalent ounces. The company also focused on zinc and lead production as silver prices have been lackluster through most of the year.

This is the second major merger announcement for the mining sector made in the last couple of weeks. Last Monday, Barrick Gold Corp announced that it would merge with Randgold Ltd. in a $6 billion all-stock deal. The new company would have a market cap of $18 billion – making it the undisputed largest gold producer in the world.
By Neils Christensen