Correction: An error was made in the company's ideal timeline for the Relief Canyon project. Blasutti said that he sees mine construction starting by the second half of 2019. The article has been corrected. 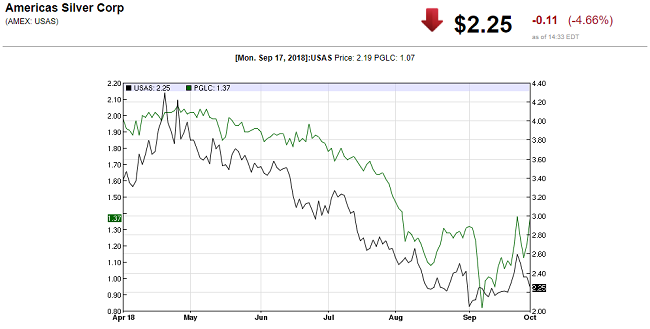 (Kitco News) - With gold and silver prices near the bottom, now is the time to be looking for opportunities that could add value to your company, according to one mining executive.

Blasutti explained that the opportunity to acquire Pershing’s Relief Canyon project in Nevada was something that couldn’t be passed up.

“Simply put, this is a great project from our perspective,” he said. “There are very few oxide heap-leach, open-pit mines with low capital intensity available today,” he said. “Whether the gold price is good or bad, the rationnale to own this mine is there.”

Blasutti said that unfortunately, in the current market conditions, single-project companies like Pershing Gold, face significant development risks when trying to bring a project online. However, he added that Americas Silver will be able to leverage its current production and cash flow to overcome potential development risks.

“We are building a $28 million capital project on the top of a $160 million company,” he said. “I think it could take us less than a year to get this project up and running in one of the best jurisdictions in the world.”

Blasutti explained that the project’s low capital costs means the company will see a strong return on its investment even if prices remain at current levels.

“Even with acquisition costs and after building the mine, we still expect to see a return of more than 15% and that is just something you don’t see in this business,” he said. “We think this project will be able to fund itself.”

Blasutti said that they would look to build the mine using a combination of free cash flow and bank financing; however, he said that those decisions will depend on market conditions.

Looking at gold and silver prices, Blasutti said that the company is positioning itself for when the market turns around. He added that it is impossible to tell when that will happen, but noted that the current prices are unsustainable.

“I would say that we are near the bottom of the market,” he said. “Gold and silver have a lot more upside potential than downside. I don’t think gold is going to go below $1,100 an ounce,” he said.

Blasutti highlighted that “in a perfect world,” pending shareholder approval, the company will be in construction at Relief Canyon by the second half of 2019.