'Gold Should Head Toward $1,400' - Bloomberg Intelligence 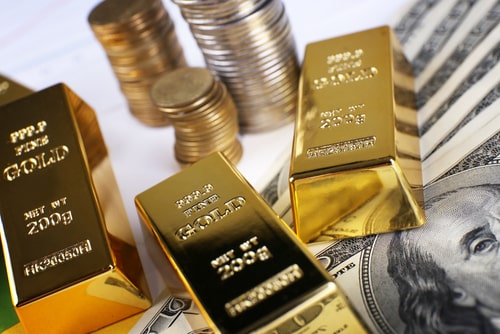 (Kitco News) - Waiting on the greenback to move is the game gold is playing lately, according to Bloomberg Intelligence (BI), which believes that the U.S. dollar will head down soon and trigger a long-awaited rebound in the precious metal.

“Metals will have a hard time recovering if the dollar rally resumes, but we don't see that happening,” BI senior commodity strategist Mike McGlone wrote in the Bloomberg commodity outlook for October. “It's unlikely the dollar can sustain itself above the 14-year high. Risk vs. reward appears to favor metals' longs at current levels.”

The rebound can come fairly quickly, noted McGlone, highlighting the end of the third quarter as a possible timeframe for the move up in the metals.

“The end-of-3Q Federal Open Market Committee meeting may get the market closer to releasing the Bloomberg Dollar Spot Index from its narrowest 20-week range since the recovery started in 2014. Mean reversion of the 20%-plus dollar rally that preceded the Fed's first rate hike of the cycle appears more likely to resume on the back of record quasi-dollar longs, as measured by precious metals managed-money net shorts,” McGlone wrote.

From a technical perspective, gold could only decline below its solid support level of $1,120 an ounce if there is a sustainable U.S. dollar rally combined with a strong stock market.

On the other hand, steady resistance level for gold is $1,375 an ounce — which was the metal’s high during the Federal Reserve’s latest tightening cycle.

Overall, Bloomberg Intelligence doesn’t rule out a move towards $1,400 for gold in the near future.

“Trading the past few years within the most compressed range in decades increases the chance of a breakout higher, typically the case in such coiled markets. If the greenback resumes the mean-reversion process of 2017, gold should head toward $1,400,” McGlone said.

In order to trigger the gold rally, the metal will not even need a major supportive driver, the analyst added.

“Typically, only a minor spark is needed for reversion to occur. In 1999, expectations of limits on central-bank sales were a prime short-covering spark for gold,” he wrote.

Silver is also looking at a bright future, maybe even more so than gold, according to the October outlook.

“Silver is set to embrace a leadership role in a metals-sector rally. The amount of ounces of silver equal to gold has reached the highest level in 23 years, with net silver positions the shortest in 12 years as a percentage of open interest. A higher plateau in this relationship is unlikely, while the potential and extent of some mean reversion weighs heavily on greater short-covering risks,” the report said.