Oct 2 (Reuters) - Sales of gold products by the Perth Mint surged in September to their highest since January 2017, while silver sales more than doubled from August to mark an over two-year peak, boosted by lower bullion prices, the mint said on Wednesday.

Sales of gold coins and minted bars surged 61 percent from August to 62,552 ounces last month, the mint said in a blog post.

Gold sales in September rose about 35 percent from a year-ago period.

Gold prices dropped 0.8 percent in September, declining for a sixth consecutive month in their longest losing streak in two decades.

"We have experienced added interest in our bullion coins since the drop in price of both gold and silver during August. Some of this is down to the previously dormant U.S. market, which at last is showing signs of reawakening," said Neil Vance, Group Manager, minted products, at Perth Mint.

From a year earlier, sales advanced about 87 percent.

Silver prices inched up 0.7 percent in September, after falling for three straight months, and marking an over 9 percent decline in the quarter ended September.

The Perth Mint refines more than 90 percent of newly mined gold in Australia, the world's second-largest gold producer after China.

Gold prices edged up on Wednesday after gaining over 1 percent in the previous session, buoyed by safe-haven demand as Italy's budget plan sets it on course for a potential clash with the European Union. 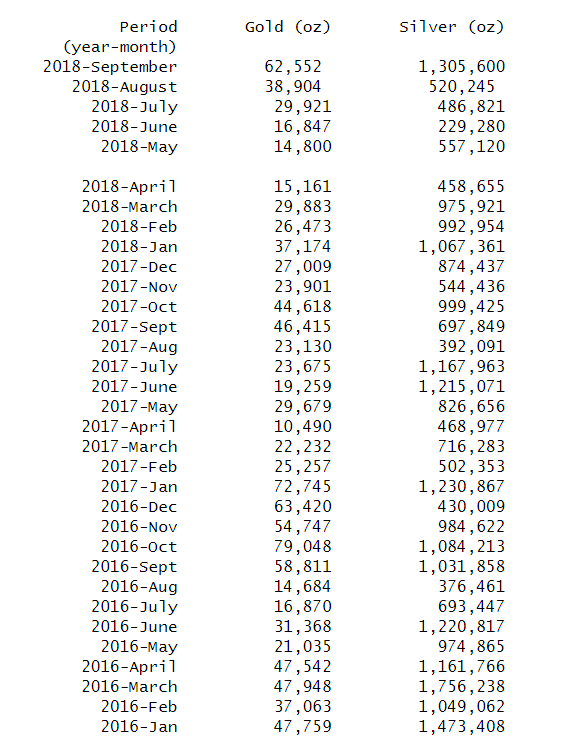 (Reporting by Vijaykumar Vedala in Bengaluru, Editing by Sherry Jacob-Phillips)

Gold and silver prices on the rise, here is why.