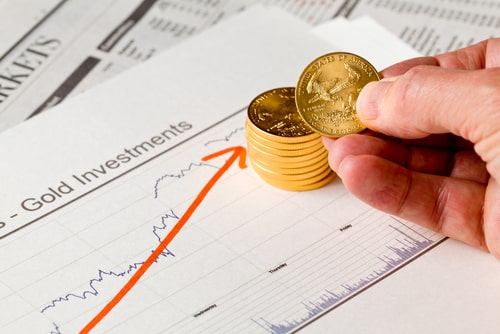 (Kitco News) - Precious metals investors should take heed of gold’s resilience in light of rising U.S. bond yields and impressive U.S. macro data, according to analysts, which point to inflation risks as one of the main supportive drivers for the yellow metal.

This week, gold prices endured a line-up of positive macroeconomic datasets out of the U.S. as well as the U.S. Treasury 10-year note yield pushing to a seven-year high — above 3.20%.

“[The index] set off the initial surge in the 10-year yields,” he noted. “Also, hawkish messages from Federal Reserve officials, including Fed chair Jerome Powell saying that interest rates are still a long way from neutral and will have to rise further.”

This is an important shift for gold, Mitsubishi analyst Jonathan Butler told Kitco News on Friday.

“When you have higher yields, it makes life more difficult for non-yielding assets like gold. If you hold [precious metals] as a hedge against economic uncertainty, higher yields make you feel like you are missing the party in a sense,” he said.

The tendency in the past has been that such a drastic rise in bond yields would trigger a significant gold sell-off, said SIA Wealth Management chief market strategist Colin Cieszynski.

“In the late 1990s, when the U.S. economy was strong and rates going up, we ended up getting a major bear market in gold,” Cieszynski said in a telephone interview.

But, not this time around, added Butler, stating that gold has not been sold off in a coordinated way due to inflation fears. “Inflation is picking up and inflation pressures are starting to come in.”

“Other world government bond markets are also seeing their yields rise, in sympathy to the U.S. This is yet another clue that creeping price inflation could become problematic down the road. That’s a bullish scenario for hard assets like raw commodities, including the precious metals, and bearish for paper assets like stocks and bonds,” he said.

Gold has been acting more like an inflation hedge, Cieszynski pointed out, adding that the yellow metal “has been going up or down with the oil price and recently picking up in tandem with WTI and Brent prices.”

The consensus among the analysts Kitco News spoke to is that gold could be heading higher next week, but there is a risk of the metal getting stuck in a tight range and not hitting this year’s high of above $1,380 until next year.

Cieszynski said he was bullish on gold next week, adding that the metal has been forming a solid base. “We’ve put in a nice low and it is starting to work itself back up. Gold will have to go through $1,215 to signal a nice run,” he noted.

Gold is looking like it’s ready to break out, said Butler while describing a consolidation process the yellow metal went through these past couple of months. “[The precious metal] is now appearing that it is breaking out of the sideways channel. But, the crucial thing is to go higher than the $1,213 level.”

It is also very important to keep track of how higher 10-year yields continue to impact gold as precious metals often take a cue from this mover, added Butler.

McKay, on the other hand, sees the tide turning only next year.

“Gold could be stuck until we get into the first half of 2019, which is when we might see the Fed cycle coming to an end as well as other central banks starting to tighten up their monetary policy,” he said.

The latest set of data released on Friday were the national employment figures, with the Bureau of Labor Statistics saying that 134,000 jobs were created in September, which was below market expectations’ of 185,000.

But, despite missing expectations, the report itself was quite strong, according to economists, who noted that July and August figures were revised up and the unemployment rate dropped to 3.7% — the lowest level since 1969. On top of that, wage numbers increased, rising 2.8% on an annual basis.

“Pretty strong report,” said Capital Economics U.S. economist Andrew Hunter. “As far as the Federal Reserve is concerned, nothing in the report changes its plans to continue to raise rates this and next year.”

Next week, investors should keep a close eye on the inflation data, said McKay, with CPI from September scheduled for release on Thursday, with market consensus expecting inflation to run at 0.2% on a monthly basis and at 2.4% on an annual basis.

Lagarde tames her biggest ECB rebellion through compromise and attrition

Gold trades lower to critical support and recovers after the release of U.S. jobless claims