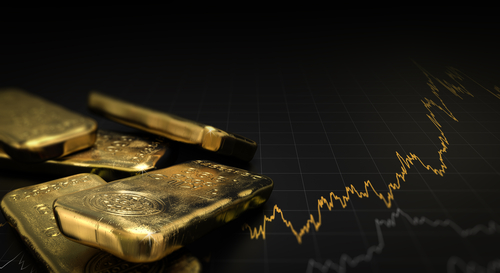 For much of the year, the negative correlation between bond yields and gold prices has broken down. However, some analysts have said that with 10-year yields hitting 3.25%, its highest level since 2011, the relationship could come back into play.

So far the gold market is taking the rise in bond yields in stride, but prices remain below the key psychological level of $1,200. December gold futures last traded at $1,191.30 an ounce, up 0.23% on the day. 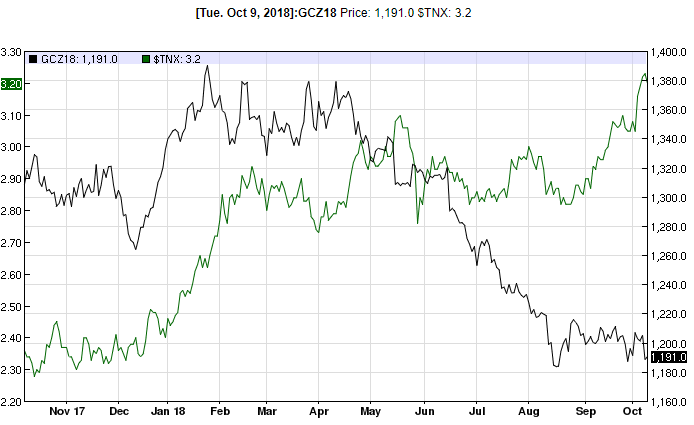 Sean Lusk, director of commercial hedging with Walsh Trading, said that he could see gold prices struggling in the short term because of the current market environment; he said there is a risk that prices break their August lows if bond yields move much higher.

He added that bond yields, which move inversely to the price, have room to move higher as the U.S. economy continues to grow and inflation pushes higher.

“If bond futures continue to sell off, I don’t see how precious metals can rally,” he said. “Ultimately we have to see higher bond yields because the U.S. economy remains strong.

Daniel Ghali, commodity strategist at TD Securities, said that not only are bond yields moving higher but because inflation is still relatively low, real yields are pushing higher, which has the biggest impact on gold prices.

Gold, which does not provide a yield, sees its opportunity costs rise in an environment of rising interest rates.

While gold has room to move lower, Ghali said that TDS doesn’t see marginally lower prices in the near term.

“Ultimately rates are still at low levels and we don’t think they will be going much higher from here,” he said. “We don’t see gold prices going much lower but will remain range bound through the rest of the year.”

Ross Strachan, senior commodity economist at Capital Economics, said that he doesn’t think that rising bond yields will have much impact on gold prices going forward.

“We expect that rising bond yields are already baked into the gold price,” he said.

Strachan added that investors also need to pay attention to why bond yields are rising. Although a strong economy will drive yields higher, weak demand for U.S. debt can also have the same effect.

Strachan said that if bond yields are moving up because the market is saturated, this could weigh on equity markets, which could be positive for gold.

“A potential correction in equities is a reason why we are bullish on gold prices in the next few years,” he said.

Lusk said that he also sees potential for gold despite the fact that bond yields are moving higher.

He noted that gold could find some support by the end of the month as focus turns to the impending U.S. mid-term elections. If Democrats can regain control of the Senate and even the House, Lusk said that he would expect to see a rise in the domestic political uncertainty, which should be good for the yellow metal.

“Investors are worried the Federal Reserve will continue down their path of hiking interest rates and equities are being dropped. For nearly one week, US stocks have been losing ground, and the rise in US government bond yields has been the driving factor. Adding to that, the move higher in yields isn’t showing any signs of slowing down, so we might see further pressure on stocks,” he said. “Today is additional proof that gold is no longer benefitting from the flight to quality play, as stocks are lower, and so is the commodity.”